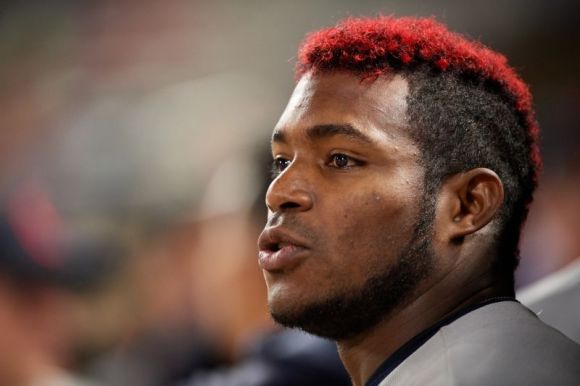 Turns out the Wild Horse is jusssst a bit outside.

The MLB bubble, that is.

Yasiel Puig didn't have his 2020 season preparations interrupted by Covid-19. It never got started. Dude's been searching for a squad since he wrapped 2019 representing MLB in the State of Ohio.

And just when he finds one ...

The Atlanta Braves thought they'd found a replacement for Nick Markakis after his phone call with a recently recovered Freddy Freeman about the lingering scourge of Covid-19.

Researchers have found -- and a significant number of victims agree -- that the virus isn't just for the Grim Reaper anymore.

With Josh Donaldson already long gone to that bomb factory that is the Minnesota Twins, dude woulda been in perfect position to more than prove his value in the heat of a playoff race where Atlanta should be one of the favorites.

He was ready to be a 29-year-old Cuban refugee intently set on yet another mission:

Needless to say, this development was as much news to Puig as it was to the Braves.

Being asymptomatic can do that.

As he accurately confirmed in that Twitter tome, it'll take two negative tests before being eligible for bubble entry again.

By then, who knows what the Braves' outfield will produce? Maybe Adam Duvall seizes the moment and changes Atlanta's thinking entirely.

Then again, in today's MLB, a club can never have too much power potential. Especially when it's proven power potential. And by the time Puig gets his two negs, a couple of other teams might be thinking the same thing.

Rumor has it 60-game seasons can sorta fly right by.

So now, more than ever, the Wild Horse's fate lies in those fickle hands of the baseball gods.

As well as two negs.