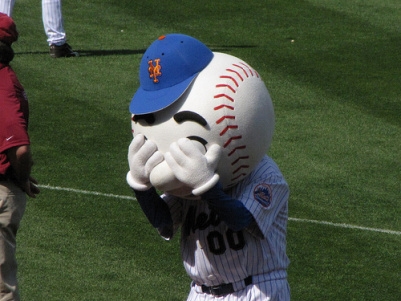 Every summer, MLB announces the all-star teams for each league with about as much fanfare as a midweek Marlins-Cubs four-game series.

Today's roster announcements shouldn't reveal too many surprises. In fact, you will hear more about who got snubbed than who really deserves to play at Citi Field on Tue 16 July, site of the 2013 All-Star game.

This year, Jonathan Papelbon, Marty Brennaman, and Clint Hurdle added some excitement with their comments about Dodgers rookie sensation Yasiel Puig.  With such bloated 33-man rosters, he should make the team with no problem. Perhaps it's Papelbon who should be worried about making the NL team!

And Clint, are you crazy? Wouldn't you want anyone on the NL roster who could help win the game? After all, that only gives the NL team the fourth home game of the World Series! The Commish is correct. This one counts!

Now, it's easy to predict who will make the team based on first-half performances, but what about compiling an anti-all-star team? This required hours of valuable time scouring box scores and sorting statistics in descending order to see who's at the bottom.

Well, someone had to do it. Thank me later.

Without further ado, allow me to introduce the 2013 All-Snark team:

John Buck - Mets: It would be a feelgood story if the Mets backstop started the game in his home park, but his .203 BA and .271 OBP wouldn't qualify for the Appalachian League All-Star team.

Ike Davis - Mets: So far, the Mets are 2-for-2. Luckily, David Wright and Matt Harvey will likely start for the NL squad and represent the host team. Davis was recently recalled from AAA Las Vegas and 'raised' his BA to .173. Yes, it got so bad, he had to 'find' himself in the Pacific Coast League.

Jeff Keppinger - White Sox: Keppinger has produced an OPS of .578 (OBP+SLG), which would be a great slugging percentage by itself, but he also leads the league in negative WAR (Wins Against Replacement), which is about the worst statistical measure of a ballplayer out there. Well, that and empty cans of Skoal Wintergreen in your locker!

Mike Moustakas - Royals: Finally! Somebody take the focus off the NL East! The Royals are competing with the Mariners for the league leader in failed prospects. By my count, it's Mariners 4, Royals 3.

Adeiny Hechevarria - Marlins: Let's get back to the NL East, since the game will be played in a stadium from this division.  Keep in mind, a player from every team must be selected for the All-Star teams, which means somebody from the Marlins has to make it. But it's just not going to be Hechevarria and his -0.9 WAR! And whoever represents Miami, please don't wear those disgusting orange alternate tops! Children will be present and adults will be eating.

BJ Upton - Braves: When Atlanta acquired the Upton brothers in the off-season, experts immediately tabbed the Braves as World Series favorites. Justin got off to a summer-in-Scottsdale hot start by hitting 12 bombs in April, which allowed Atlanta fans to overlook BJ's meager .172 BA and -1.1 WAR.  If BJ isn't careful, he's going to find himself playing for the Gwinnett Braves!

Chris Carter - Astros: When Mark Reynolds set the single season K record in 2009 by whiffing an astounding 223 times, it was talked about as being one of the unbreakable baseball records, joining Joe Dimaggio's 56 game hitting streak, Rickey Henderson's 1406 career stolen bases, and Cy Young's 511 career wins are regarded as the safest records in the books.  Carter is on pace for 222 K's; he's therefore making an assault of historic proportions. I'll be rooting for you, Chris!

Juan Pierre - Marlins:  I'm not picking on the Marlins, I just needed a leadoff hitter. After their off-season purging of overpriced veterans, everybody knew Miami was going to be one of the worst teams in the league. However, I don't think they were predicted to challenge the 1962 Mets for the worst record in MLB history! For the record, I'm not picking on the Marlins, either. They did show a glimmer of competence by having the majors' second-best record in June.

Adam Dunn - White Sox: It hasn't been a great summer in Chicago as the crosstown Cubs have only eked out two more wins than the Southsiders. Dunn has shown the power he was known for in Cincinnati by belting 23 HR's thus far. It's just that .205 BA and 99 K's and -0.1 WAR and the White Sox suck!  About 2.5 more seasons and Dunn will become the career K leader, surpassing the great Reggie Jackson's record of 2597 strikeouts.

Joe Blanton - Angels: I drafted Blanton on my fantasy baseball team and released him sometime around Memorial Day. I also predicted an all-LA World Series and thought that the fifth starter on the Angels would be good for 15-16 wins. Well, he has nearly produced that many losses, along with a 5.14 ERA, which denies Joe the excuse of "my defense let me down", or "I'm a tough luck pitcher." On the bright side, he has only walked one more batter (19) than HR's allowed (18). My mother told me if I didn't have anything nice to say about somebody, don't say anything at all. So that's why I came up with one nice thing to say.

Brandon League - Dodgers: Now I see why my all-LA World Series prediction won't come true. The Dodgers thought they were good enough on paper to get by with a mediocre, veteran closer who likes to serve hanging sliders as if he worked at Applebee's. League has fooled teams before -- most recently the Seattle Mariners -- into thinking he is an MLB-caliber closer.  His 6.16 ERA and 1.60 WHIP make him the easiest choice for the All-Snark team!

Please don't take it too hard. You made a great run at it.