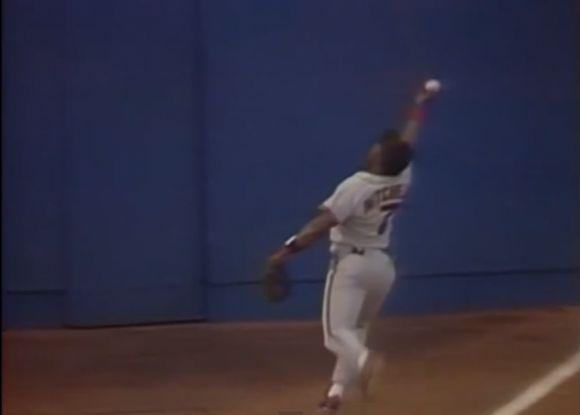 A full slate of MLB games on any particular weeknight will typically feature at least a few spectacular outfield catches.

And here's one of them now.

The Minnesota Twins have a right fielder by the name of Eddie Rosario, with whom you might not be familiar.

Turns out dude has a firm grasp on this whole baseball thing.

Check out this nifty piece of work in right field against the Tigers in Detroit:

Better use my strong hand. pic.twitter.com/KOgaIMeVlC

His pimp hand is quite strong.

While that play was obviously pretty sweet, Rosario can handle the stick as well.

“That’s one of my favorite Eddie Rosario home runs right there.”

But let's get back to that catch:

Eddie Rosario just made a ridiculous play in right field. He made a sliding catch and as he was rolling on the ground, the ball popped up out of his glove. He reached and caught it with his throwing hand. Wow. Word descriptions don't cut it. Got to see it.

Oh, and dude's done this sort of thing before:

While on the subject of bare-handed catches in MLB, it'd be irresponsible not to mention Kevin Mitchell in the left field corner at Busch Stadium.

That one has aged very well.