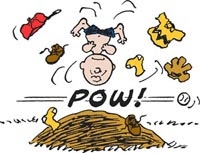 They have the technology.

They just don't have the fashion police on their side.

It's easy to see why. Check out San Diego reliever Alex Torres, who made history of sorts by becoming the first MLB hurler to don the armored headgear that's currently available and MLB-approved:

It's tempting to compare the look to others in modern culture. Take Rick Moranis in Spaceballs, for instance:

All that technology, and dude isn't wearing a cup. Proof yet again that it's tough to take measures if someone isn't going to take advantage.

One of the more infamous incidents of damage includes Cleveland's Herb Score, a Sandy Koufax-talent just before Koufax's time. Had the New York Yankees' Gil McDougald hammered a liner right back at Score's head, history might have been comparing Koufax to him:

Until something more studly is presented, though, few pitchers are going to follow Torres' lead. But there's hope. Note a key fact in this promotional video for XProTex batting gloves:

Reducing the impact of a 100mph heater to that of a Little League-speed pitch is significant. These batting gloves are slightly heavier than the top brands but are just as innocuous in appearance. There's hope.

Even for those brave few who buck convention and wear oversized hats.