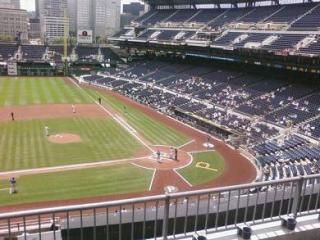 However, this dwindling attendance thing has almost reached critical mass.

The Bucs recently hosted the Miami Marlins, which on paper looks like a potential disaster at the box office.

Well, the paper would be correct.

Shit, there wouldn't be enough people to get a proper sing-a-long going, anyway.

The Wednesday night game was particularly depressing for anyone with a financial stake in the number of seats filled at PNC Park.

They announced the attendance at a shade over 9000, but there's simply no way that's accurate.

I don’t run the Pirates. If I did, this look a couple minutes before first pitch would scare the hell out of me: pic.twitter.com/eA85K7RHaP

Sadly, that lonely video was taken mere minutes before the first pitch.

They can goose the numbers any way they like, but there couldn't have been more than a couple thousand people in that gorgeous ballpark.

Now. we're talking about a weeknight game with the Marlins, but this level of apathy is alarming.

Pirates owner Bob Nutting must be exhausted from taking a machete to the payroll, which is why he's greeted by an empty ballpark for every home date.

Somehow, the Bucs are only 26th out of 30 MLB teams in average attendance.

And who would be dead last?

If you guessed the Fighting Jeters, you win a complimentary roster spot.