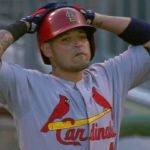 They always say that when you go to the ballpark, you may see something you've never seen before.

Well, on Sat 9 May, every waking soul with eyes on the field in Pittsburgh's PNC park saw something no one in history had seen before.

A triple play combination that had the SABR geeks reaching all the way back to 1876.

Here it is, with St Louis Cardinals' catcher Yadier Molina at the plate and runners on second and third:

It's hard to tell who was more asleep at the switch, Cardinals' runner Justin Heyward or the dude doing the play-by-play.

That other saying about a picture being worth 1000 words?