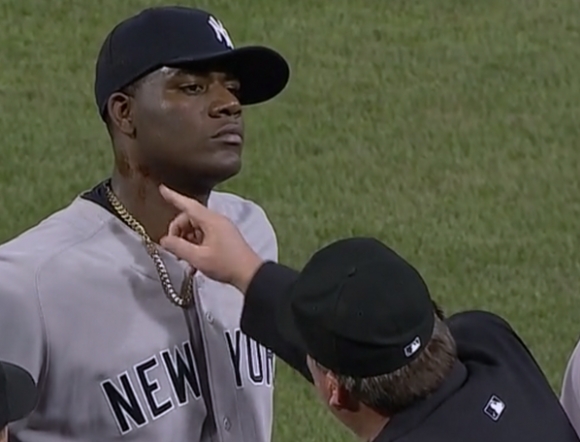 Yankees hurler Michael Pineda now knows shame. Ten games' worth. He got away with pine tar on his wrist during his start against the Red Sox earlier this season, as the Bronx Bombers posted a 4-1 victory. The Bostons seemed non-plussed at the situation then, but they weren't so understanding in the return bout last night.

Noticing a suspicious looking sheen on the sticky pitcher's neck, they called upon the men in blue to do what they do:

Afterward, the young hurler and the Yankees organization said all the right things. What else could they do after Pineda was caught red-handed tar-necked? In the other dugout, Bosox skipper John Farrell and catcher David Ross were diplomatic to the point of being apologetic. After all, it behooved them to tread lightly. Jon Lester's been caught on camera with interesting patches on his person, too.

Then there's Clay Buchholz, who's enigmating enough as it is. Does he doctor the ball? The Blue Jays are sure of it.

Rosin. Great sideways answer. So great, Lester used it, too.

It's a fine line -- or is it a matter of perspective? -- between cheating and gamesmanship.

As an aside, that Pineda-for-Montero trade between New York and Seattle is looking more and more à propos.

Meanwhile, Yankee manager Joe Girardi has some juggling to do. Pineda's on furlough, and Ivan Nova is on the TJS plan. Someone's gotta pitch, and he won't want to make the call to infielder Dean Anna again. These are problems they just don't have on the Cubs, or if they do, no one would notice.