Phillies: In the Name of Humanity, Trade Hamels and Papelbon 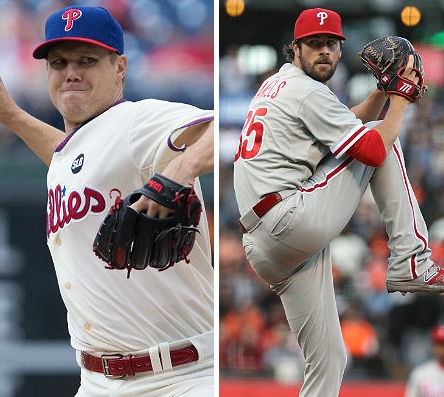 I know I'm nowhere near qualified to run a MLB team.

Most people aren't, and those who are probably already do.

I can say with full confidence, though, that I could run the Philadelphia Phillies better than their current GM.

In fact, Charlie from It's Always Sunny In Philadelphia would make a better GM, and he can't read.

What Ruben Amaro Jr has done to the Phillies is the baseball equivalent of what Dragonball Evolution did to Dragon Ball Z: take a storied franchise, one built for success, and mercilessly run it straight into the ground.

Inheriting the position just after the Phils won the 2008 World Series, Amaro's bizarre trade demands, inexplicable free agent signings, and poorly-planned drafts have caused the team to fall into complete disarray with no prospects, human or metaphysical.

Amaro's contract ends when this season does, and with the transfer of power from Pat Gillick to Andy MacPhail, there's seemingly no way that he'll be part of the new regime. Therefore, he's probably in no hurry to please his new overlord.

Still, if Amaro was interested in saving as much face as possible, he'd finally ship Cole Hamels and Jonathan Papelbon out of town.

Hamels has been rumored to be on the block since before the Royal Baby was born, and Herr Schritt Schnappen has been demanding a trade roughly since the day he signed with the team.

Both are languishing away in the City of Brotherly Love, wasting innings pitched for a team comprised of mannequins with gloves and Chase Utley's deteriorating cartilage. Why? Because Amaro thinks any team acquiring either hurler should cough up multiple top prospects and fork over enough cash to cover the remainder of their contract.

A Texas Rangers exec summed up the scenario succinctly when asked about a deal for Hamels:

Two years ago, when Hamels and Papelbon were younger and pitching better, the Phils' demands were insane. Today, they're completely insane. Hamels is worth a single top prospect, one or two mid-level guys, and maybe a little salary relief, while Papelbon is worth a bag of rats.

Those rats, by the way, would project as Philadelphia's No 3 prospect. The bag is ranked No 5.

The Dodgers seem like a natural fit for Hamels:

Papelbon would make sense for damn near every contender, even if his tendency to talk too much makes him a negative clubhouse influence. I'd say he should join the Yankees, because I'm one of those people that just wants to watch the world burn.

If Amaro has a brain in his head -- he's no Branch Rickey, but I'm starting to wonder if he's even as smart as a tree branch -- he'll lower his expectations and give these two the opportunity to once again play October baseball.

It's literally the least he can do, for both the team and his own reputation.