Pence Swings for the Fence 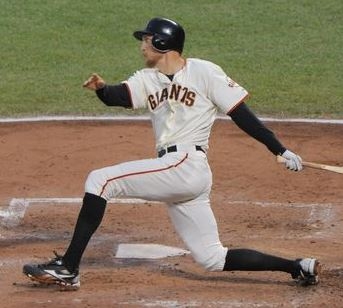 After getting hit in the arm by a pitch in Spring Training and fracturing his forearm, World Series champion Hunter Pence made his return to the field this weekend.

Pence didn't waste any time at all getting back into the line score for the Giants. After basically no Spring Training and a couple extra months of off-season and rehab, the Giants' spiritual leader made his 2015 debut by going 2-4 with a two-bagger.

The following day, with a swing that looks like the art project of a 12-year-old on ecstasy, he notched his first homer of the campaign.

Pence's two-run shot helped San Francisco squeak by with a 9-8 victory on Sunday.

While his return to the field leaves less time for dancing, the Giants are no doubt thrilled with the offensive output they've come to expect from him.