Owner Beware: Magic Johnson Must Resist the Urge to Suit Up for the Dodgers

Published on 1-Apr-2013 by Xavier McSpaniel 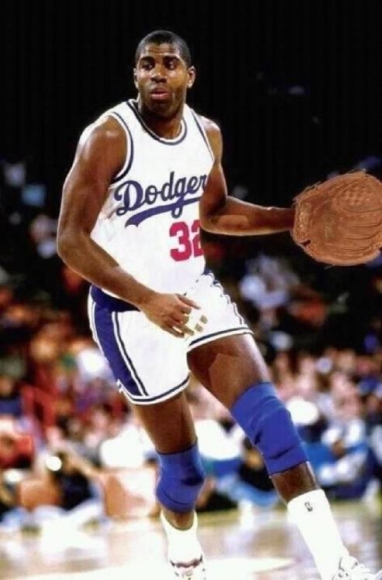 That's the expectation of one-time solid NBA trundler-turned-LA Dodgers part-owner, Earvin 'Magic' Johnson. And with good reason: Johnson and his fellow Guggenheimers have invested a cavalcade of zeroes (perhaps at the expense of a few Dick Clark productions) to fast-track title aspirations not seriously considered since Tommy Lasorda's '88 team wore the mantle.

Do Gonzalez and Greinke and Kemp and Kershaw and the corpse of Carl Crawford and the beer tab of Josh Beckett have the goods to go all the way? That remains to be seen. What is also an unknown quantity is Big-Boss Magic's ability to avoid the 'Meddlesome Owner' tag when things inevitably get rough during the 162-game marathon.

Everything is peaches and rainbows right now as the calendar ticks over to April: the Hall of Famer can compare Adrian Gonzalez to Kareem Abdul-Jabbar without getting laughed out of one of his theatres. Opening Day all went according to plan, too, with Clayton Kershaw claiming both the home run crown and the CY Young Award against the defending champion San Francisco Giants.

At some point, though, there'll be injuries and futility and uncomfortable questions. In those moments, can Magic Johnson -- eternal optimist, ultimate winner, a man unaccustomed to losing, an obsessively controlling point-guard in life as on court -- stay out of the way?

No. He can't help himself. He will end up on first base or behind home plate or walking out to the mound in a Don Mattingly disguise. He will take charge the only way he knows how: by putting the ball in his own hands.

And, somewhere on the other side of the country, a suddenly perky Michael Jordan will Google 'Chicago Cubs net worth'.