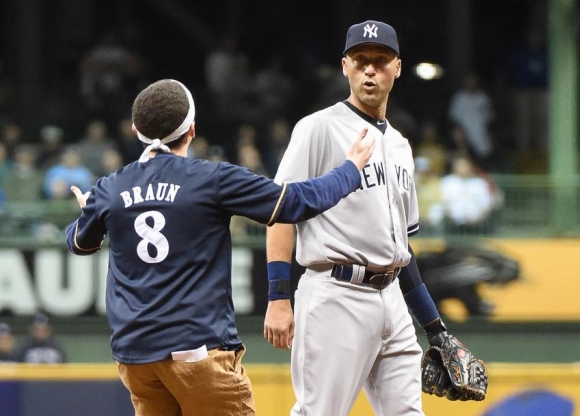 The 2014 Derek Jeter bon voyage extravaganza is currently in Milwaukee, and while I'm sure the Brewers organization is embracing the New York Yankees' shortstop with open arms this weekend, an incident that occurred on Friday night at Miller Park was probably not part of the formal program.

The embrace referred to above was of a metaphorical nature, but one enthusiastic Brewers fan was craving the real thing and resorted to extreme measures in order to get it.

Jeter was doing his thing at shortstop, not bothering a soul, when this special fan -- clad in a Ryan Braun jersey and sporty bandanna -- suddenly appeared on the field. Actually, it's disturbing just how close the fan got while being virtually undetected. Jeter described the scene thusly:

''His face was calm. He was saying he wanted a hug. I was thinking I wasn't going to hug him. That was pretty much it. It happened pretty quick. I didn't even see him until he got past the third-base line.''

The Bombers' captain even tried to warn this buffoon of the impending doom that was fast approaching in the form of two security guards. But, alas, it was too late, and the fan was taken down in typically brutal fashion.

These sorts of incidents are not usually shown on television, the principle being that this type of behavior should not be encouraged. While it's entertaining to watch a fan run on the field if you're at the game, I cannot even begin to imagine what the players must be thinking.

Perhaps there's a mixture of amusement and horror, knowing that someone who is willing to run on the field in the middle of a sporting event may be capable of pretty much anything. Of course, there's precedent for some very bad things happening under such circumstances, but fortunately, for all concerned, this incident was benign.

There's been much speculation as to the nature of the gifts Jeter will be receiving on his MLB retirement tour, but a hug is always welcomed.

Jeter handled this potentially ugly scene remarkably well, but he probably would have been content with a gold watch.