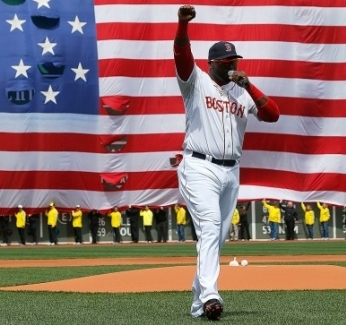 Even after 37 years on this planet, David Ortiz has plenty of pop left in his bat.

Fresh off his third trip to the World Series, Ortiz capped off a stellar season by winning his third ring with the Boston Red Sox, and it looks like he's ready for more.

The man who started his career with Seattle as David Arias batted .309 on the season while mashing 30 homers and driving in 103 runs. Suffice it to say Father Time has yet to catch up with the dynamic DH as he continues to do what it takes to get in shape and be ready for each coming season.

Ortiz announced in a press conference at his home in the Dominican Republic that he would like to stay with the Sox “at least one more year.” Now what does that mean? Does it mean Ortiz wants another two-year deal after the 2014 season, or does it mean that he will retire? Or -- dare I say it -- does Ortiz want out?

Either way, the clock is ticking on Big Papi, and no F-bombs or barging into press conferences will stop his career from coming to an end.

This is an offseason for Sox fans to celebrate. We'll save thoughts about the future for another day.