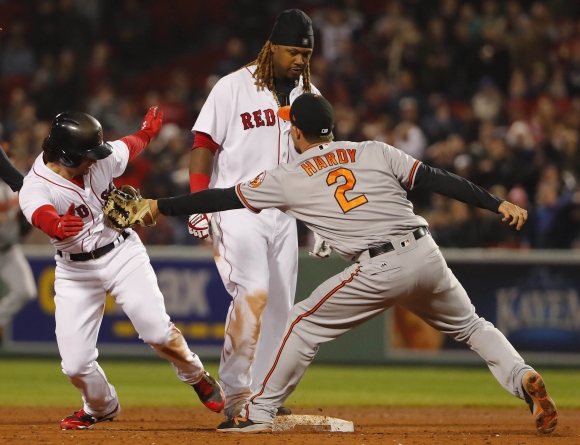 This type of occurrence is rather rare and usually fairly straightforward, but it does involve a fairly significant amount of chance.

Sometimes, though, the triple play is just really confusing.

Amid the shenanigans in their series, the Baltimore Orioles pulled off one of the confusing variety this week at Fenway Park against the Red Sox.

Yeah, that's a lot to unpack.

If it's any consolation, Bob Costas was just as bewildered as you are.

We do know that three outs were recorded on the play.

It seems everyone -- including Costas and hitter Jackie Bradley Jr -- was expecting the infield fly rule to be called.

Obviously, this was not the case, and as the runners on first and second barely moved, they were both easy outs.

Bradley didn't even make it to first and was thrown out as well, completing the madness.

Of course, the irony is that if Orioles shortstop JJ Hardy actually catches the ball instead of lurching awkwardly towards it, then only one out is recorded on the play.

But alas, sometimes incompetence is rewarded in this life.

While this triple play was not of the unassisted variety, here are some of those for your viewing pleasure: