Orioles-Rays to Switch from Empty Stadium to Empty Cavern 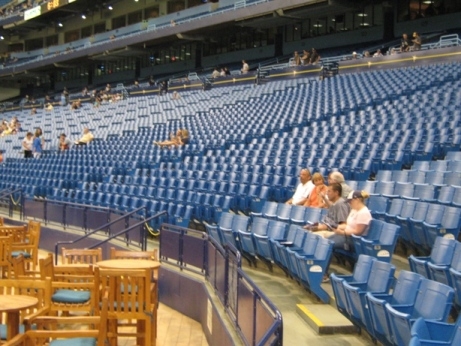 With all-out mayhem in the streets of Baltimore at the time, MLB Commish Rob Manfred was forced to take extreme measures to keep players, umpires, stadium staff, and fans safe in Merry-Land.

After postponing games on Monday and Tuesday -- to be made up in a double-header on 28 May -- it was announced that the game slated for today will be closed to public.

With a city-wide curfew in effect, TV ratings for the Orioles and White Sox tonight could go to Pluto. This is being done to eliminate the risk for those 20-30 people who are crazy enough to brave downtown Baltimore just to see a game at Camden Yards. Having said that, anyone who's been there says that Boog Powell's BBQ out in the right field concourse is worth the price of admission on its own. But we digress.

According to the Orioles website, anyone with a ticket to this game or the ones that have been postponed, there are some exchange options available. Just be civil about it.

Again, these decisions took place before the curfew proved to be effective, and there's still no guarantee that it'll remain that way.

So, the series between the Orioles and the Rays scheduled for Camden Yards this weekend will be shifted to the mausoleum known as Tropicana Field in St Petersberg, with the O's serving as the home team on the Tampa Bay Ray's carpet.

While these certainly aren't ideal circumstances, it's clear that the Commish was taking no chances. And I'm sure the White Sox are pleased about it, too. They've had enough fighting lately.