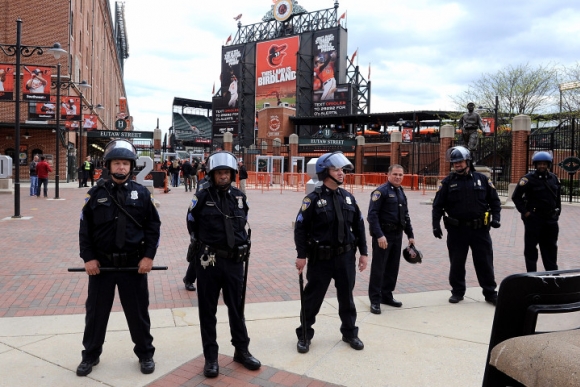 More than once, race issues in Europe have caused the soccer poobahs to order a match played without fans in attendance.

The ostensible reason was to protect players because parts of a crowd was incapable of controlling itself.

Now, for the first time in North American major sports, doors to a game will be closed. And, albeit not as directly, race is the issue again.

Obviously, the city's got bigger issues than a ball game right now. And clearly, it's not just Baltimore.

What is it with police forces these days? Yes, it's a dangerous occupation, but why are there serial instances of them making it more so? Yes, they must cope with more gray areas of social mores than distant observers will ever totally comprehend. But that's their damn job! Allegedly, they were trained to rationally handle this stuff.

When it's perceived that they can't or won't, the extremists win. On both sides.

So now the stark reality of a nation unwilling to substantially compromise and address the complex underlying causes of this inanity spills over into the arena of fun and games, again.

Ironically, baseball has felt the effects of this social stalemate more sharply than its contemporaries. It's rarely a game attainable for the underprivileged sector of its citizenry:

Even more ironically, baseball -- like other sports -- features a team of individuals from diverse backgrounds combining their skills for the benefit of all and the enjoyment of many. They do it to the sound of cash registers ringing up revenues like never before.

And this is what must be shut away in the name of public safety. Incredible.