Published on 4-May-2017 by Alan Adamsson 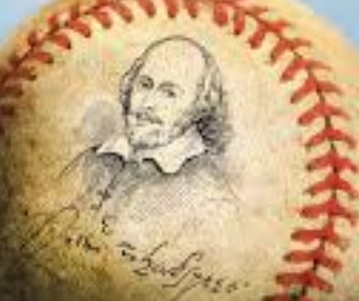 Those who cannot learn from the past are condemned to repeat it.
-- George Santayana

It's the human condition, isn't it?

Every generation has to make the same mistakes for themselves. In some cases, it may take a little more time for stupidity to re-ascend, but eventually, it will.

So, let's pause to reflect upon a re-hashed observation that is the current conflict between Boston's Red Sox and Baltimore's Orioles.

Well, that's how a certain well-known Bard -- no, not this one -- woulda put it if he'd been a sportswriter at the Orioles-Red Sox game on Fri 21 Apr.

That's when Manny Machado did the spikes-high thing that knocked Dustin Pedroia outta that game and the next day's.

The hell of it is, Machado apologized and Pedroia accepted it, but that wasn't gonna get in the way of baseball's unwritten rules.

So goes the germination of all senseless grudges that ultimately spin outta control, paying no heed to one of literature's great warnings of the consequences:

How was this tragedy not fresh in Matt Barnes' mind on Sun 23 Apr when he sent a heater behind Machado's head?

Other than being a novel way to get a foul ball on a hitter, that wasn't too cool, dude.

And Pedroia underscored this sentiment to Machado.

Ahhh, but the seeds of discord are not so simply rent asunder.

As the venue shifted to Boston on Mon 1 May, did Machado doing what he's paid to do fan the flames of illogic even more?

That was a rather leisurely victory lap.

As an aside but keeping with the theme here, it defies sensibilities that O's owner Peter Angelos told his scouting director at the time, Ron Hopkins, that he'd fire him if he drafted Machado. Hopkins did anyway, and that's why he's now in the Pittsburgh Pirates' front office.

Anyway, that blast added to a cushy enough lead that Dylan Bundy -- or someone -- decided the time was right to zero in on Mookie Betts' butt. Again, not cool.

As usual in feuds, there was collateral damage in the asinine symbolism of a bag of peanuts being tossed at Adam Jones.

The Red Sox found the offending fan and banished him from Verona Fenway Park for life.

Enter Joe Torre from MLB's ivory tower as this version's Friar Laurence, trying to bring the warring factions together.

An overreaction. What else?

Later, in the name of equal-opportunity insipidity, Adam Jones got an early shower:

Like the Capulets and Montagues, if this keeps up, someone's gonna really get hurt.

A sustained injury to a key player because of some stupid feud could cost either team dearly. The AL East looks like it'll be a dogfight that'll come down to a game or two at the end.

It really is time for Boston and Baltimore to start learning from the past, even if it takes a nudge from the greatest writer in Western history.