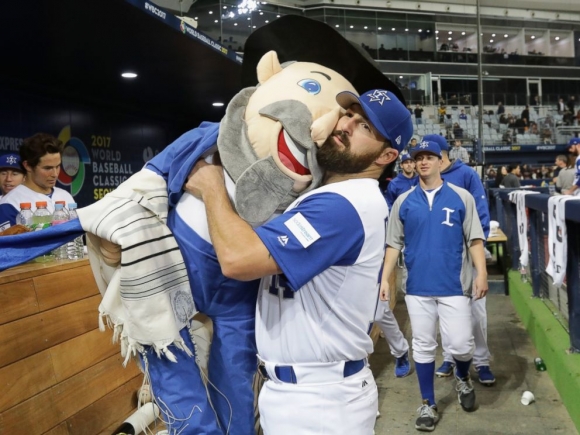 Usually in major international sports events, the competing teams have a domestic league.

However, that hasn't stopped them from making noise in the World Baseball Classic.

They almost qualified for the tourney's main event in 2013 -- being edged out by Spain -- and have now broken through in 2017 after a 3-0 Pool A record that began with this surprise:

Among those listed names are current MLB free-agent pitcher Jason Marquis, who was out of baseball last season, and Sam Fuld, who's trying to catch on with a club this season.

With plays like this in his WBC résumé, he's got a shot:

Israel then upset a strong contingent from Curaçao and Aruba The Netherlands, 4-2, and outslugged Chinese Taipei, 15-7, to lug their Mensch from the Bench mascot into the next round.

How is it possible that the 41st-ranked outfit in world baseball -- called by some as the WBC's Jamaican bobsled team -- has taken their longest-of-longshot status this far?

What else? Convenient rules.

FIFA, for example, allows soccer players to represent a nation if they have at least one parent or grandparent being a citizen there.

So Israel, Holland, and Italy can offer a fairly decent field for powerhouses like Japan, the USA, and Mexico.

If this keeps up, there might be a demand to tighten the roster rules.

Then again, if it keeps up, fans might actually pay more attention.