Oakland Pitcher Sonny Gray Records a Most Unusual Out 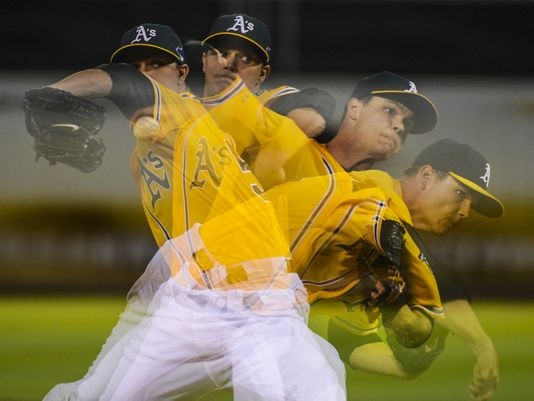 The MLB regular season is a long haul, and over the course of 162 games, there are bound to be some strange happenings from time to time.

Yes, props were used, but not by design.

Seager hit a rope that bounced off the aforementioned first base bag and remained in mid-air right to Gray, who was conveniently moving toward first base and recorded the easy out.

Here, have a look:

That is borderline spooky.

By all accounts, this is easily the most bizarre occurrence of the 2014 MLB season to date. It's one of those plays that would be near impossible to replicate if the participants were actually trying. The timing and element of pure chance would be most challenging indeed.

Seager’s line drive needed to hit the bag at just the right angle and velocity, while Gray was moving instinctively in the direction of first base simultaneously. After that, it was a question of Gray simply stepping on the base, and then of course colliding with umpire Jim Reynolds for good measure. Because why not?

It was amusing just how quickly the play developed and then was suddenly over, although I suppose most pitcher-unassisted putouts do end rather abruptly.

It's unfortunate that the first base bag did not get the proper acknowledgement in the form of a number designation for the official scoring of the play, although the rights of an inanimate object are somewhat limited, and rightfully so.