Now, Manfred's Telling the Rays' Stadium to Speed It Up 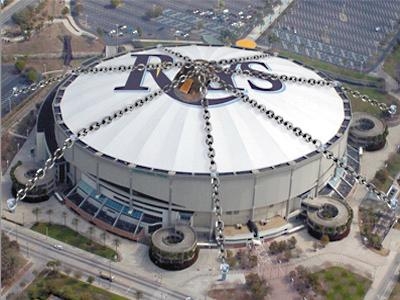 And to think this dump was once considered a des res for MLB owners looking to blackmail their local cities and fans.

Build it and they will come?

Turns out, that'd only happen when MLB -- under ol' Proud to Be Your Bud -- got paid an expansion fee.

Did MLB see this city coming, or what?

After the tethered goat thing wore off -- and three owners were enriched in one way or another -- all St Petersburg got was:

And from the rubble of eternal darkness, beams of sunshine pierced their abbreviated name.

The club did find smart people to guide them all the way to the 2008 World Series. Then, when those dudes left for bigger brands in Los Angeles and Chicago, they found other smart people to replace them.

So they're getting stuff figured out down there.

But not fast enough for the Stopwatch Commissioner.

Manfred seems like he's trying to have MLB become another Shield, which despite minor concessions, still doesn't get that pro sports are the players' games.

The fact is, despite stopwatches on pitchers, games are longer this year than last year.

If players were egregiously stalling in games, that'd be one thing.

If a local owner is being as proactive as possible to make his team's situation work in his area, that's the same thing.

Fans often get accused of spending other peoples' money when it comes to their favorite teams. Manfred may be a fan, but he's also inside the game enough to know better.