No Speedo for Magic 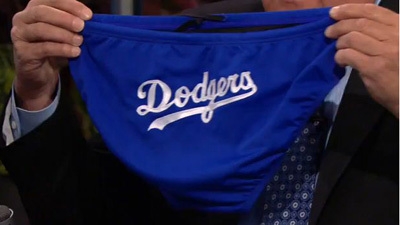 From the jaundiced perspective of this San Francisco Giants fan, the only bad thing about the Dodgers not making it to the World Series is that we’ll not need to see Magic Johnson flaunting the silly custom Speedo that Jay Leno had made for him.

But perhaps the baseball gods turned against the Dodgers after their club of overpaid spoiled brats took their unsportsmanlike dip in the outfield pool at Diamondbacks stadium after winning the NL West.

The late regular-season dominance and the NL playoffs did afford Brian Wilson the opportunity to prove that he still has it. Even so, it seems that the Giants have dodged an eventual bullet. Not forking over millions of dollars for an arm that in all probability won’t make it through the rigors of a full season’s campaign has all the appearance of the better part of valor.

Let their rivals continue to throw good money after bad. That leaves the Giants free to focus on younger and/or less expensive talent that's more likely to make it over the long haul.

But hindsight does prove that they should have held onto that Uribe fellow.

In losing the playoffs, the Dodgers have reaffirmed the Cardinals' place in baseball lore as more consistent post-season producers than Los Angeles or most other teams. The grim specter of the injured Dodgers players hobbling through another offensive phone-in will be one enduring image of the affair.

But there were no Kirk Gibson-esque performances this time around.