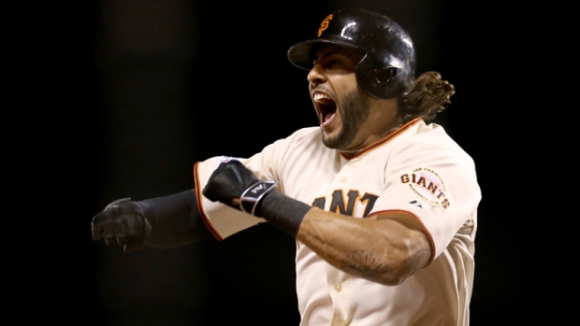 The San Francisco Giants were a travelling dinger-free zone until it really counted.

Rookie 2B Joe Panik got the parade rolling with his second career bomb in the third off St Louis Cardinal ace Adam Wainwright, who was virtually untouchable the rest of the way. Unfortunately for the Cardinals, that 'way' only lasted seven innings.

He exited with a 3-2 lead in a game St Louis needed to return the series to their yard, but Michael Morse had other ideas. This is why Giant manager Bruce Bochy kept him in reserve, with Wainwright gone and set-up man Pat Neshek tossing straight heat:

That blast matched the output of Matt Adams and Tony Cruz -- who, with one swing, match his output for 2014 -- and underscored how this series became a comparison of bullpens. San Francisco's firemen sprayed the strike zone with running stuff and breaking stuff. The Cardinal relievers nibbled until they were forced to challenge, and unthinkable irony, given their fireballing rep from the year before.

And because the Giants' attack had forced St Louis skipper Mike Matheny to dip into his pen in the fourth inning the night before, he resorted to shelved starter Michael Wacha to work the bottom of the ninth. One of last year's mound stars, injury kept him from pitching since 26 September. Apparently, it should have kept him from pitching on 16 October:

San Francisco and St Louis have been trading World Series appearances since 2010, with the Giants getting the even-numbered years. And since the Cardinals disposed of the Orange & Black's kryptonite -- aka the Dodgers -- the planets had aligned once again.