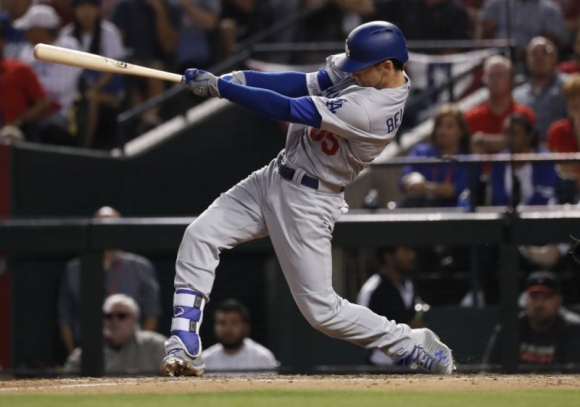 Full marks to the Arizona franchise.

Those dudes from the desert sorta did an NL version of the Minnesota Twins.

If they didn't have the luxury of playing the San Diego Padres 18 times, the Snakes might've even finished with worse than the 69-93 campaign they endured.

So, flipping the script to a 93-69 record a year later is pretty damn impressive, even if they still played the Padres 18 times.

In fact, Arizona's record was one game better than the Chicago Cubs'.

Too bad they were playing in the same division as the Los Angeles Dodgers instead.

Besides beating up on San Diego, they both got to do the same in 18 games for the suddenly diminished Giants.

Bottom line: the Diamondbacks should spend some time this off-season to feel good about themselves. The rest of it will be devoted to finding a way to make up 11 games on an outstanding Dodgers operation.

That'd better be the feeling good about themselves plan.

Either way, foremost in their minds will be the total domination the Bums wreaked upon them in all three games.

Here's the one that sent the Snakes packing, taking note that even when they got torrid rook-of-the-year-to-be Cody Bellinger out, he still inflicted damage:

Bellinger will join a long line of Dodger Rookies of the Year, and like Corey Seager, it's odds-on his coronation will be unanimous.

Going further, give the organization props for prioritizing its farmhands over free agents in recent times. This is surely the greatest reason for hiring Andrew Friedman and faithful sidekick Farhan Zaidi away from the resource-challenged Tampa Bay Rays.

Dudes know what they're doing.

At least the Diamondbacks had one final tactic against the Dodgers that proved to be effective:

Meanwhile, the big-fish Dodgers now move on to the challenge of a larger pond.