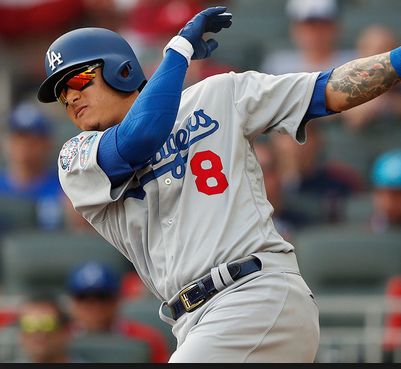 Professional baseball goes back to 1869 -- giving dudes in Cincinnati something cool to do after the Civil War.

And throughout all the legendary dynasties between now and then, none had a longer run than the Atlanta Braves.

Ironically, they've got all of one World Series title to show for it.

Despite a wealth of young talent being yanked away from them last winter due to their devious dealings in the international market, Atlanta still has a solid core of players -- like fashionista Ronald Acuña Jr -- capable of assembing another string of playoff-making seasons.

They just don't want it to go the way of last time, but that's how it's begun.

These young Braves are ahead of schedule, really, and the experience Dodgers just helped them realize it with a 6-2 verdict in Game 4.

It closed out the series with veteran David Freese delivering the capper:

Having never seen October baseball in person before, Manny Machado's getting the hang of it.

Frankly, his glove's been what the Dodgers were anticipating when they traded for him, but dude's been slow on the uptake with his bat. Here, though, he may have gone 3-17 for the series, but two of them went far, far away.

The Braves are odds-on to have their day, but this one belongs to the dudes who've been there and done that.

And since Los Angeles hasn't won a World Series since 1988, they're of the opinion that their time is definitely now.