Published on 4-Oct-2018 by Alan Adamsson 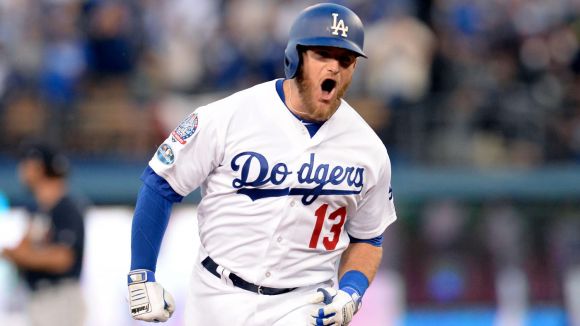 For the teams who survived the one-game, everything's-magified tiebreaker and next-day Wild Card contests, they can breathe at least a small sigh of relief.

The margin of error in a five-game divisional series is slightly more forgiving.

The Colorado Rockies might more sensitive to this than most right now.

The Rox may be 1-2 since the season's 162nd game, but they won the one that kept their post-season drive alive.

It came at an anticipated cost of fresh arms. Both clubs used six chuckers:

Both strategies were effective. Hits were few and far between. This meant white-hot Christian Yelich only got two, but one made it into the public sector. Canny vet Mike Moustakas took it from there to deliver a 3-2, 10-inning Brew Crew victory:

No such drama of the baseball persuasion out at Chavez Ravine.

The Dodgers clubbed Colorado into submission to claim the NL West tiebreaker, and the hits -- long ones -- just kept on coming in their NLDS Game 1 tilt with Atlanta's peachfuzzy Braves.

Not only that, the pitchers were just as stingy for a second straight game:

One game does not a divisional series champion make, but Los Angeles looks to be trending. For Atlanta, Game 2 has all the trappings of a Wild Card-sorta pressure redux.

And they probably thought they'd skipped all that by being the only team to win an NL division outright.

Nope. A second straight loss here, and they're in danger of being engulfed by Dodger blue.