Published on 7-Oct-2018 by Alan Adamsson 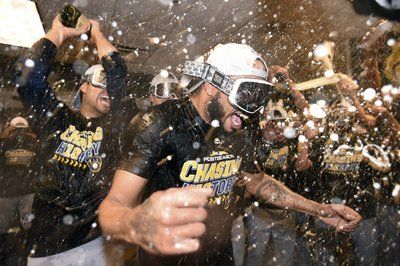 There's something fitting about Milwaukee wrapping up its Division Series in a business rival's home state.

The Brewers already poured suds all over St Louis in the regular season, and now, they've tapped Colorado.

Now, while waiting for the Los Angeles Dodgers to complete the inevitable, they've got an extra couple of days to ponder one of eternity's burning conundrums:

Anyway, Milwaukee moved one step closer to the High Life, complements of a tag-team four-hitter and a three-dinger attack that produced a 6-0 victory to complete a sweep of the Rockies:

The Brews used six slingers and continued their trend of racking up goose eggs. In fact, the Rox scored in only one inning the entire series, which was the two-run ninth in Game 1.

What's more, the staff all but silenced Colorado's engine room:

One spiffy storyline running under the radar is the performance of catcher Eric Kratz.

The Atlanta Braves are doing what they can to climb back into their series with the Dodgers, and Freddie Freeman did his bit by smashing a seat-seeking laser in the sixth to break a tie and ultimate seal ATL's 6-5 triumph.

But the delivery of the day was from real-deal rookie Ronald Acuña Jr, who became the youngest dude ever to hit a grand slam in the post-season. He didn't know about the record at the time, but he was damn sure about the swing:

He's the youngest player in postseason history with a grand slam, at 20 years, 293 days old. pic.twitter.com/kLDD9nDAL3

The Dodgers are nothing if not persistent, and they never looked fazed while ripping chunks outta that early 5-0 Atlanta advantage fueled by Acuña's El Smacko Grande.

Full marks to the Braves for eking this one out, but even with the five-run lead, this game had all the appearance that Atlanta was merely buying time.

They're a young club with a promising future, but they just don't look ready to take three in a row from the defending NL champs, with the series' fifth game being on the road.