NLCS: No Doubter; Dodgers Are the NL's Best 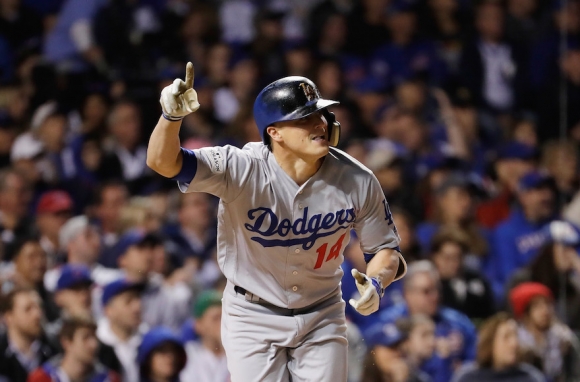 Seattle Mariners fans are convinced their team is MLB's wormhole to stardom.

All a player needs to do is be rostered by them, wait to be traded, and it'll happen.

It's a long list -- current examples include Adam Jones and Logan Morrison -- and now, Chris Taylor is glad to be a part of it.

Dude just joined under-the-radar superhero Justin Turner as co-MVPs for their performances in dismantling the Chicago Cubs to earn the National League championship.

When Taylor and Turner weren't highlighting rallies, they were spearheading them.

That was their role in Game 5, when Los Angeles emphatically closed out the NLCS to the tune of an 11-1 beatdown:

It was clear from the start of this one that the Dodgers' brain trust assembled a game plan to attack José Quintana early in the count, and do it often.

Seemed like they'd also correctly assumed Héctor Rondón and John Lackey were gonna serve up heaters in one of their first two pitches, and that's when they weren't hanging sliders.

Can we say cleared for takeoff?

The only hit he had prior to Game 5 was as a mid-game replacement the night before. Now dude's in the history books.

Los Angeles has now won a total of 111 games this season. They're 8-1 in the playoffs.

They've finally made the World Series for the first time in 29 years, when they prevailed over the then-mighty Oakland A's in five games, including tne one when Jack Buck didn't believe what he just saw.

If Buck had been around to see this NLCS, he'd be singing a different tune.