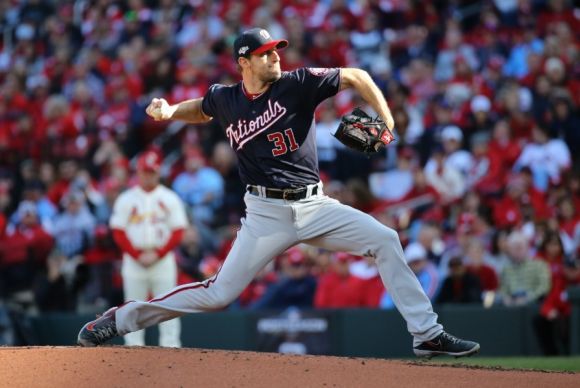 What's amazing is the aces haven't even taken the mound yet in this series.

When they do in Game 3, Stephen Strasburg and Jack Flaherty will have hard acts to follow.

The Washington Nationals starters in Games 1 and 2 both took no-hitters into the quality zone:

Overshadowed were a pair of valiant-but-insufficient outings by the Cardinals' starters:

On most days, those totals would be good enough for at least a split of two home games.

The Cardinal offense has been a challenge most of this season, and there have been spells when they made the 1965 Dodgers look like the 1927 Yankees.

Speaking of ... just how light-hitting were the Bums in that era?

Not that the Nationals were lighting it up, either. Late afternoon shadows had pitches dancing, darting, and sometimes blazing from daylight to darkness. But Washington hit the mistakes that glared in plain sight, and the Cardinals didn't.

Sánchez was a pitcher's pitcher in that 2-0 shutout, changing speeds and pinpointing placement to silence St Louis.

Then came Scherzer, who grew up 20 miles from Busch Stadium III and looked like he owned it in Washington's 3-1 victory:

Part of the Cardinals' proud history -- their 11 World Series titles trails only the Yankees' massive 27 -- included the 1964 Series when they took two of three on the road before coming home to win it.

The difference between then and now is they split the first two games at home.

Washington, meanwhile, is in unchartered territory for their franchise.

In their Montréal Expos incarnation, they got to the NLCS only once -- 1981 -- and were turned away by flag-saving Rick Monday and the Dodgers.

Something like 88% of teams who won the first two NLCS games on the road went on win the series. Pausing for cause, though, with an advantage like that, this number seems a tad low, which oughta encourage the never-say-die Cardinals.

Both clubs are no doubt keeping that in mind for different reasons.