NLCS: Dodgers Ride the Wild Horse to Victory in Game 1 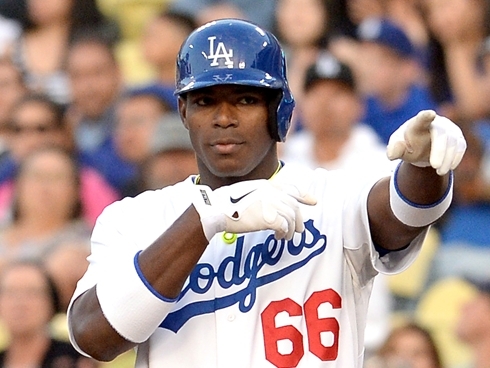 Besides that. Unless it's the Diamondbacks' outfield pool.

The Koreans would understand. So would the Canadians.

Clearly, the Los Angeles Dodgers have come to terms with it and anything else Puig does, like this calling his shot double that tied the Chicago Cubs in Game 1's fifth-inning:

Puig is firing on all cylinders right now.

Credit skipper Dave Roberts for the reclamation. The front office wasn't sure they wanted his antics in Dodger Blue for another season, but Roberts said to leave it to him.

Dude's a horse whisperer, and Clayton Kershaw is still a stud.

Maddon getting tossed just to get tossed was interesting. As he said, the umpires themselves had the decision at home taken outta their hands.

Maybe the rule on catchers blocking home plate needs to be throttled back, but it's not gonna happen in the middle of a game.

Then again, the ejection meant he could lean back in his cushy manager's office chair, pop a cold one if he's so inclined, and sneak messages down the tunnel if the occasion arises.

Dude's known for weird ways, but the way this series is starting, Puig's got him length.