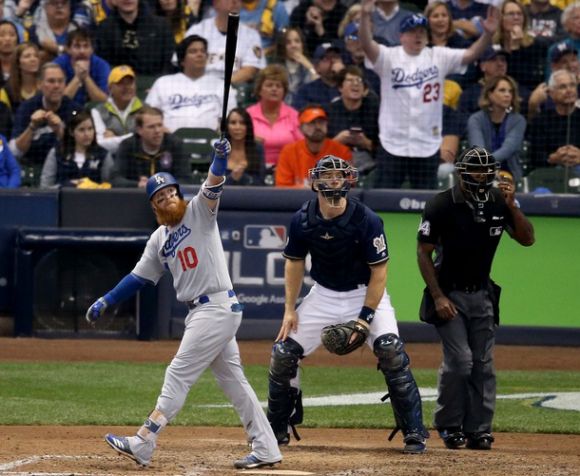 Based on his performance last year, Justin Turner's become a sorta post-season legend.

Dude hit a bump in that road with an 0-5 collar -- earning a Golden Sombrero in the process -- as the Los Angeles Dodgers dropped Game 1 of their National League Championship Series with Milwaukee.

But that's the great thing about baseball ...

And in baseball, that tomorrow rolls around pretty damn quickly.

Turner, for one, is appreciative of that fact, re-assuming his role as right dude in the right place at the right time.

As in the eighth inning of Game 2 with a man on and his club trailing by a run and in danger of going two games down in this best-of-seven clash:

After tag-teaming his hurlers the day before, Brewer manager Craig Counsell needed a conventional starter's outing in this one, and he got it from Wade Miley.

However, it was his redoubtable bullpen that wore the horns today.

In the 2016 World Series, Cleveland skipper was justifiably roasted for overexposing his bullpen. While most starters have at least a three or four pitch arsenal, relievers usually make do with two. Batters just don't see them enough in game action to adjust.

It's not nice to dick with the baseball gods and the delicate balance they bestowed upon the game.

The Dodger hitters' matchup with the Brewer bullpen could be the key to who moves on to the Really Big Stage.

Justin Turner will clearly be right in the middle of it all, too.