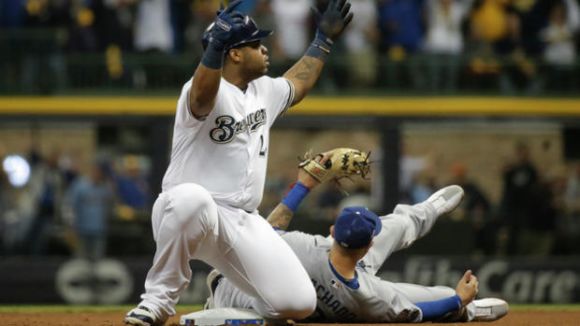 The thing about a long playoff series is, by the time Game 5 and onward rolls around, it's possible the only thing players don't know about their counterparts is their shorts sizes.

But with advanced metrics, video study, and in-game tendencies, they'd probably have a good idea.

So, maybe the Los Angeles Dodgers and Milwaukee Brewers share mutual suspicions of chicanery, but really ...

Couldn't it really be that hitters have seen enough of how they're being pitched to start anticipating a location?

Both Jésus Aguilar and Eric Kratz had seen their share of middle-outs from Dodger pitching, so it's not a surprise they were looking to go oppo in the first inning.

The resultant four runs supported Wade Miley and the usual cast of thousands outta Milwaukee's bullpen on the way to a 7-2 Brewer victory in Game 6.

It's not like they've got anything else to do out there if they're not spying or something.

One way or another, Aguilar wasn't done. Dude also lashed another RBI double late in the game.

Then there was David Freese, signed by the Bums for his playoff experience. Little did he know he'd perform and then exit early. Crazy.

This means the baseball world gets another game of Craig Counsell and Dave Roberts staging another clinic in micro-managing.

The tone for this was likely set when three of the first four games were decided by a mere run. Not so in Game 5 or this one.

Who knows, for example, what Freese might've done with a few more ABs in this series?

Maybe that'll be answered in Game 7. Then again, probably not.