NLCS: Brewers Win What Will Forever Be Known as the Woodruff Game 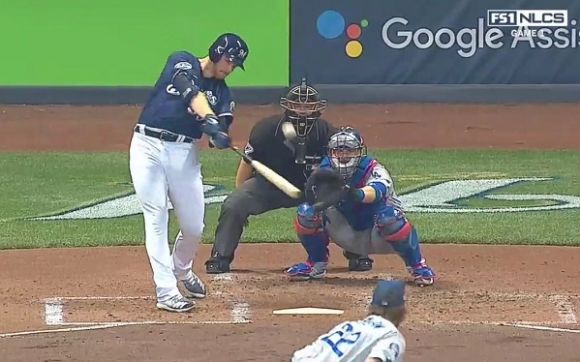 Is baseball a crazy-great game or what?

Its first formal rules were written in 1845 and records have been kept ever since.

The mind-boggler is there's still stuff that's never happened in a game, and in this age of red-headed stepchild statistics and the wonder of digital access, it seems like they're multiplying.

The NL Championship Series opened with a couple of them, one of which was a vital factor in Milwaukee's Brewers holding on in the late innings to manage a 6-5 decision over the Los Angeles Dodgers.

It was also Milwaukee's 12th straight victory -- going back to the regular season, obviously -- and was a classic example of how today's managers can turn homer-happy games into a next-level kinda chess.

In this one, it was Brewer reliver Brandon Woodruff, appearing early -- as in the third inning -- in his usual role and then reminding one and all that he's a full-service jock.

Dude did it by tying the game, 1-1, with a single, sudden, and surprising swat offa Clayton Kershaw:

Woodruff then went into flamethrower mode and fanned the side right afterward.

Not to be outdone, the Bums registered a pair of statistical firsts, too. They just weren't as cool:

Each of these happenings -- and a late-inning Jesús Aguilar dinger that looked like window dressing at the time but soon wasn't -- figured prominently in the proceedings:

It's also appropriate to break out the old bromide that no lead is gonna be safe in the NLCS.

And we've seen proof yet again that when you take in a game, you may see something that you've never seen before. Or anyone else.