NLCS: Almost All the Dodgers Needed 13 Innings to Beat Almost as Many Brewers 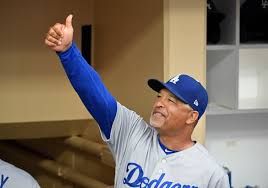 There's a cool rule in Little League that stipulates every munchkin on the team's gotta play.

The only remuneration that's ever involved is a possible post-game trip to Dairy Queen or somewhere similar.

It's a bit different in the pros. A good numer of dudes are paid well to cool their jets for an entire game, sometime for days on end.

And they've gotta get their own damn DQ. Or something similar.

And then there are managers like Dave Roberts and Craig Counsell.

Dudes seem to like it better when everyone plays.

Thus, there are no hotfoot or bubblegum pranks in the NLCS dugouts this season.

In Game 4, Gonzalez had no choice but to leave after suffering what looked like a sprained ankle in the first inning. When righty Freddy Peralta replaced him, Freese was immediately pulled for left-handed hitter Max Muncy.

Why all the late-inning moves so early? Well ...

This is all well and good, but when a game goes 13 innings, there are MLB-minimums determining a vital post-season game in situations beyond their pay grade:

So, a 2-1 Dodger result, finished by a couple of slingers who, for all we and their teammates know, are in witness protection programs.

Through it all, oh the humanity ...

Not to mention sabremetrics, and

With an afternoon game tomorrow.