New York - A Yankee Doodle Dandy of a Play 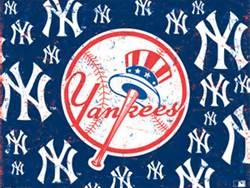 It's been a good start to the week as we've hit a couple straight, and today, I'm counting on the New York Yankees to deliver the turkey (that means three strikes in a row in bowling; here it just means I've got some extra beer money, and the ramen noodles can be replaced with spaghetti for a short while).

Speaking of birds, the ones from Baltimore are who the Yankees face today in the rubber match of a three=game series at Camden Yards.

Like our Tuesday selection of Cincinnati, the Yankees seem to be a slight favorite with the oddsmakers, but a heavy favorite in Soprano-land. Hiroki Kuroda (6-2; 1.99 ERA) starts for New York, and he's quielty been a dominant pitcher in the majors this season. His last outing was a perfect example, as he tossed eight innings of shutout ball, whille allowing just two hits and a walk in a Yankee 5-0 win over Toronto on Friday.

It's been that way pretty much all season for Kurda, though, whose ERA over his last seven starts is actually lower than his season ERA at 1.38. This will be his first ever appearance at Camden Yards, but Kuroda has been dominant against Baltimore in his three career starts against the Orioles at home. Kuroda's numbers (as seen on the Bovada data tool on our Home page) include a 2-1 record against Baltimore, with an ERA of 1.85. It shouldn't be forgotten that Yankee Stadium is a very good hitter's park, so if he can put up those numbers against the O's at that venue, he certainly can do it in Baltimore.

Jason Hammel had a great start to the season for Baltimore, but has fallen on very hard tmes as of late. Hamel (5-2; 5.72) has been tagged for 13 runs and 18 hits in his last two starts, and that's just in 8⅔ innings. He also has had a lot of trouble when facing the Yankees, with an ERA of 5.82. Vernon Wells and Robinson Cano have gone 15-40 lifetime against Hamel, with three home runs between them.

New York is playing better on the road (13-8) than Baltimore is at home (10-12), and the Yankees are 10-5 in games this season coming off a loss. This one may look fairly close to oddsmakers with Bovada putting the Yankees at -118, but with so many indicators in their favor, I am much more confident that that. I will be in a New York state of mind tonight and seeing green when it's over.