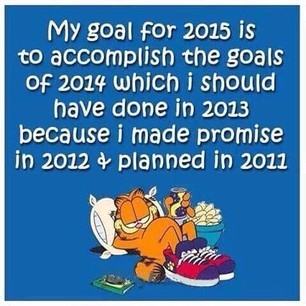 No more champagne
And the fireworks are through
Here we are, me and you
Feeling lost and feeling blue
It's the end of the party

If you haven’t changed the calendar yet, it’s not too late to pick one up in the clearance bin at Wal-Mart. Just make sure it reads 2015 across the top.

And as that calendar races towards spring, MLB teams have little time to spare in preparing for the upcoming season. In fact, there are 47 days left until catchers and pitchers report, so get the pine tar and spittoons ready to play ball!

Every team has areas they can improve upon, and there's no better time than the present to make commitments that will last until St Patrick’s Day. So if you’re going to the gym tomorrow, don’t expect to find a parking spot or any availability in group classes. Not even an open treadmill.

All 30 MLB teams are starting anew, just like you and me, and for that we can relate if -- and most likely when -- your favorite team decides to jump ship, cut bait, throw in the towel, or do whatever it is the Mets have perfected in the recent past or the Cubs think they may finally have shaken.

Hopefully, that doesn’t happen until Memorial Day. It’s never too late to make positive changes in your life.

Ane with that in mind, let's help each MLB team with a New Year's resolution of its own:

Arizona Diamondbacks – Renewed relations with Cuba. They were 'way ahead of President Obama on this topic by signing Cuban slugger Yasmany Tomas. The D-Backs went through a regime change itself hiring new GM Dave Stewart and Manager Chip Hale so they can relate with the Cuban people. And with a Republican Senator actually backing the policy shift, it only follows that Tony LaRussa is ready to scour the island for reinforcements.

Atlanta Braves – Declutter before moving. As they prepare to move into their new stadium in Cobb County, the less they have to move, the better. But they've gotta pay better attention; they got rid of the wrong Upton brother.

And so do the Braves. To date, they'll have to do it with the lesser Upton still on the roster.

Chicago Cubs – Let go of the past. And wouldn't they love to! With Joe Maddon at the helm and ace Jon Lester on board, it’s time to put an end to all this billy goat nonsense.

Chicago White Sox – Embrace the underdog role. The baseball world will be focused on the Cubbies, but the moves down in the South Side were just as good, if not better. Most experts will pick the Royals and Tigers to make the playoffs out of that division.

Cincinnati Reds – Be gracious hosts. The Mid-Summer Classic comes to Cincy this year. They should have several players in the game, too, if all goes well. And that's without them buying tickets.

Cleveland Indians – Finish the race. The second-longest World Series championship drought resides on the banks of the pollution-free Cuyahoga River. The Tribe doesn’t want that stigma if the Cubbies win it first.

Colorado Rockies – Protect your assets. Trading CarGo and Tulo would be a mistake. Don’t’ break up one of the best lineups in the majors just for the sake of getting some pitching prospects that won’t adjust to the altitude in Denver, just like every pitcher before them!

Detroit Tigers – Spend wisely. After trading for SP Alfredo Simon, it appears unlikely that they will re-sign Max Scherzer, but after watching the ChiSox strengthen themselves, it still can't be ruled out. They'd have an awesome rotation. Just think if they hadn’t traded Doug Fister to the Nationals for nothing.

Houston Astros – Plan a summer vacation. Come Tuesday, it’s likely Craig Biggio will pick up the two votes he needs to get elected into the HOF. Word is he’s been campaigning hard in the swing states. Will teammate Jeff Bagwell join him in Cooperstown this summer? That would be pretty cool!

Kansas City Royals – Keep up the momentum. After reaching the post-season for the first time since 1985, KC has the talent to make a deep October run, including getting to the World Series again. The question is, can quirky manager Ned Yost pull the same rabbits out of his hat?

Los Angeles Angels of Wherever – Repeat performance. AL MVP Mike Trout needs to win the award again if the Angels are going to compete in the best division in baseball. Josh Hamilton just needs to keep cashing those paychecks. And Albert, well, his family still lives year-round in St Louis. Maybe he should've, too.

Los Angeles Dodgers – Get out of debt and save money. The Bums took a step in the right direction by trading Matt Kemp to the Padres. Unfortunately, they passed the Yankees as the top team paying luxury tax.

Miami Marlins – Maximize earning potential. Signing OF Giancarlo Stanton to a record contract of $325million is going to cost them dearly over the next 13 years. Unless of course, Fish owner Dr Evil Jeffrey Loria doesn't have yet another dastardly scheme waiting in the wings. Fans don’t come to the park to look at fish tanks.

Milwaukee Brewers – Reflect on the past. Except maybe for that one year when they were the Seattle Pilots. Bless you, Jim Bouton! Retired Commissioner Bud Selig will get his very own Selig Experience at Miller Park. This is not to be confused with the Jimmy Hendrix Experience. These are two entirely different experiences. But one theme song.

Minnesota Twins – Follow the leader. New Manger Paul Molitor is sure to bring a calm and steady approach, exactly what made him a HOFer with the Brewers, Blue Jays, and Twins. He's the gold standard, which may have influenced the new highlighting on their unis. Unfortunately, that may be their top highlight in 2015.

New York Mets – Reconnecting with old friends. SP Matt Harvey returns from Tommy John surgery as an integral part of the rotation with Rookie of the Year Jacob deGrom. And yes, European fans, we know; but that's the way the family spells it these days. Can the Mets feast on a fairly weak division and sneak into the playoffs? Anything is possible in the new year. But dudes, it's spelled ultimate:

New York Yankees – Say no to toxic relationships. Alex Rodriguez claims he’s coming back to play this year. That remains to be seen, and no one from the Yankees would be sad if he's sidelined with a severe case of jock itch.

Oakland Athletics – Find a comfortable place to call home. The City of Oakland is rumored to be getting trendy these days -- despite Gertrude Stein's warning -- so build a state-of-the-art ballpark that isn’t subject to the whims of Marc Davis and the Oakland Raiders.

Philadelphia Phillies – Get out of debt and save money. They got rid of one high-priced veteran but have several more that have no business being in a Phillies uniform. Isn’t it ironic that they traded Rollins to the Dodgers? Meanwhile, keep it real, Philly, as only you know how!

Pittsburgh Pirates – Repeat performance. Just like the Angels, if the Pirates are to make the post-season for the third year in a row, CF Andrew McCutchen needs to be in the MVP discussion once again. Chances are good he’ll be da man. But how much will they miss Russell Martin's presence? If the Buccos fall short this year, blame Canada.

San Diego Padres – Ringing in the New Year with a bang. What an off-season it’s been in North Tijuana! Newcomers Matt Kemp, Wil Myers, Justin Upton, Will Middlebrooks, Derek Norris, Brandon Morrow, Brandon Maurer, and Shawn Kelley are expected to turn this franchise around quickly. And if they don't, it is San Diego.

San Francisco Giants – Spend more time with family. Winning their third championship in five seasons has Fisherman’s Wharf abuzz with anticipation akin to casting a line on opening day of sport fishing season. The Giants only win World Series titles in even years, so they deserve some time off.

Seattle Mariners – Extending goodwill towards others. The Mariners took a big step last year, missing the post-season by one game. Signing Robinson Canó restored faith in Emerald City baseball fans that the organization is trying to win and not just trying, period. At least they can sign big checks. Bringing in Nelson Cruz proves that it’s more than just a PR stunt. Still, caveat emptor. The customer is always right.

St Louis Cardinals – Buck the trend. Please, do not sign or call up another player named Matt. The person responsible for publishing the media guide is getting confused.

And they've probably all got wives named Ashley.

Tampa Bay Rays – Seek guidance for answers. Joe Maddon spurned Tampa Bay by gravitating toward Chicago like a bug toward black light, and then they traded one of their best players. The Rays hired another manager untested at the top level in Kevin Cash, but the same was said when they hired Maddon. Don't put it past them and their fertile farm system to be in the post-season hunt again.

Toronto Blue Jays – Set attainable long-term goals. Thanks to Kansas City, the Blue Jays now have the longest playoff drought in MLB since winning back-to-back World Series titles in 1992 and 1993. Toronto sports fans make the transition to hockey quite well when October comes around on the calendar. Of course, that just frustrates them more, since the Leafs haven't hoisted the Cup since 1967. Speaking of lacking in October baseball …

Washington Nationals – Actions speak louder than words. The Nationals had another disappointing finish to the 2014 season, bowing out early in the playoffs. It’s still a race between the Mariners and Nationals for who makes the World Series first. They’re the last of the holdouts, definitely hoping they're not the new Cubs.