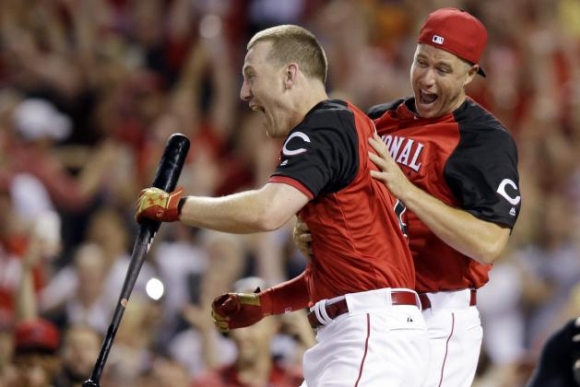 That's what MLB wanted, it looked like that's what the fans got, and that's because the participants were on the clock.

The All-Star festivities debuted their new format for the home run derby at Cincinnati's bandbox officially known as the Great American Ballpark.

Rather than the previous age-old out system, the sluggers had timed rounds in which they had to hit as many long-balls as they could.

Originally set at five-minute rounds, MLB decided to reduce the time to four minutes due to weather concerns in the area. In addition to their four minutes on the clock -- as well being allowed to take one 45-second time-out -- hitters had a chance to earn a bonus 30 seconds for drilling a dinger farther than 425 feet.

It's fair to say Giancarlo Stanton may have changed the outcome of this event if he didn't break his hamate bone during a swing.

In any case, the derby was certainly worth watching as hometown hero Todd Frazier ended it with one blast in his bonus time. As the sport without a clock seems to be adding timers in all over the place, this is definitely one case where it works out well. Adding a ticker to the derby reduced its total length and added excitement to the festivities.

Each of the seven match-ups was determined by one home run. What that means is that these dudes were racing the clock and hoping their smash landed before the clock struck 0:00.

Aside from the fact that the majors' biggest hitters hit shot after shot, the new format added a suspense that was never before present.

Now, pressure shifts to the All-Star game itself, which had better be good if it doesn't want to be overshadowed by the derby.

Frazier became the second person ever to win the Home Run Derby on his home field and the first in over 20 years.