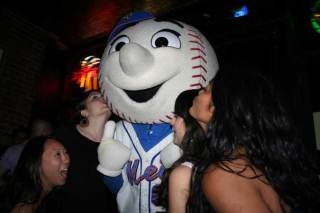 It was about the odds of MLB teams winning the World Series next year.

The New York Mets were listed as 115:1 odds by some sports books to win the Fall Classic in 2014. Bovada has more faith in them, putting their futures number at 75:1. Personally, I'm a strong believer that their odds will be much better than that. Here are a few reasons why:

Even though this past season's ace for the Mets, Matt Harvey, is a question mark for even making a start next year, the rest of the rotation showed some promising signs down the stretch. Aside from the high number of walks and high batting average against (BAA), Zack Wheeler has the potential to become a household name within the baseball community in the coming years.

I was fairly impressed with Carlos Torres, who is naturally more of a long reliever. I saw him pitch at Citi Field on 14 September. He has a certain focus and confidence on the mound that I sensed rather quickly. I feel he should return back to the bullpen, but this is not out of disrespect, as he'll surely be an asset in the late innings. Jon Niese has been one of the best lefties in the game over the last few years. He almost always gives his team the ability to keep games close. The cutter that he features is arguably one of the best in the game. Lastly, Dillon Gee had one of the best second halves of any starting pitcher in the game. He frequently went deep into them, which was imperative for a team with an over-used bullpen.

A couple of pitchers come to mind who have the potential to deliver exceptional 2014 seasons. Relief pitcher Vic Black, who was aquired from the Pittsburgh Pirates, has an electric fastball that seems to dart right out of his glove.

The Mets are also confident that their closer, Bobby Parnell, will be ready to pitch by the time spring training rolls around. Before a season-ending injury last summer, Parnell was having the best year of his career.

The offense will likely once again be led by infielders Daniel Murphy and fan favorite David Wright.

Murphy has become a consistent .300 hitter and has started to develop more pop in his bat, logging a career high in home runs this past season. If Wright stays healthy, he'll certainly have the capability to help the Mets compete in the tough National League East. There was talk about acquiring Shin Shoo-Choo from the Cincinnati Reds; if that were to occur, the top of the lineup would receive an enormous boost, both offensively and defensively.

All four of the Mets' projected 2014 outfielders -- Juan Lagares, Eric Young Jr, Andrew Brown and Matt Den Dekker -- all have outstanding speed in the field. After leading the NL in stolen bases in 2013, I'd certainly expect Eric Young to compete for this title once again, even with Billy Hamilton playing a full season in Cincinnait. Juan Lagares ended his year with double-digit outfield assists. This is a very underrated aspect of the game, providing the opportunity to change outcomes entirely.

The Mets manager, as well as GM Sandy Alderson, made it clear on camera just as the regular season was ending that their team would contend in 2014. I am a strong supporter of this statement. 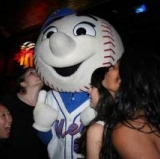 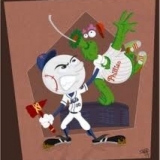