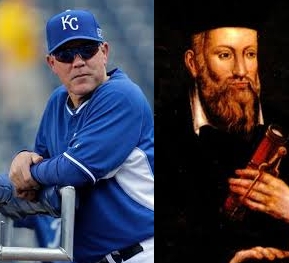 The Milwaukee Brewers fired Ned Yost for being unconventional one too many times.

The Kansas City Royals will no doubt fire him for his quirks sooner or later.

The Yost Mojo is on a roll, sort of like a dude at the blackjack table without the X-ray vision.

As the ninth inning of ACLS Game 2 of a 4-4 tie at Camden Yards was about to unfold, Kansas City's madcap manager revealed his vision to Royals shortstop Alcides Escobar. According to Andy McCollough of the Kansas City Star, it went like this:

Here is what will happen, Yost told him. Omar Infante will lead off with a hit. Yost will insert pinch runner Terrance Gore. Mike Moustakas will lay down a bunt. And then Escobar will record the hit that wins the Royals the second game of the American League Championship Series.

And that's how a wild card team that's yet to lose in the 2014 post-season wins Game 2 of the ALCS.