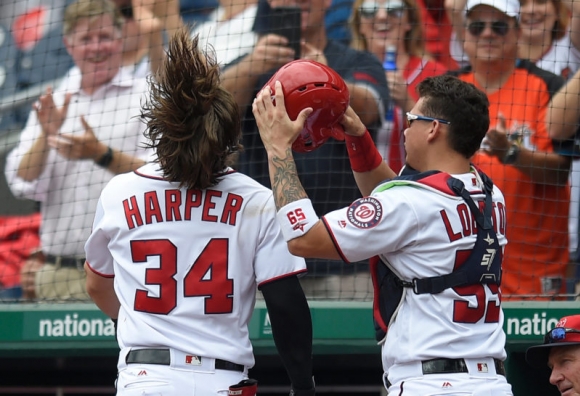 The 2017 MLB Home Run Derby was pretty entertaining, with the Yankees Aaron Judge routinely blasting bombs over 500ft in distance.

A good time was had by all, but it appears the Washington Nationals were particularly influenced by the show.

In fact, they even decided to stage their own derby in a random game against the Milwaukee Brewers.

They made a bit of history in the process.

That is just silly.

For those of you into such things, this was only the eighth time this has ever occurred in an MLB game.

The Nationals added a fifth poke in the inning for good measure, just to drive home the point further.

Incidentally, the Arizona Diamondbacks were the last team to go yard four times in a row back in 2010.

You may have noticed that was also against Milwaukee.

The Brewers seem to have a dubious knack for this sort of thing.

Returning to 2017, the Nationals had incredibly hit eight homers through the first four innings, including two by the ridiculous Bryce Harper, but ran dry for the rest of their 15-2 assault of the Crew.