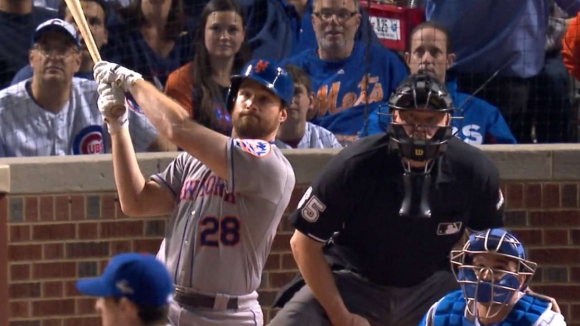 Let's get the moral of this story out there right now.

If Michael Cuddyer has a feeling, bet on it.

Dude took a pay cut to sign with what looked to be your typical, everyday mess of a Mets team last winter.

Turns out he turned down money to join a club that's been money all October, and last night was no different as the Mets completed an NLCS sweep of Chicago's Cubs:

As the bromide goes, good pitching beats good hitting, so it's no surprise that good, young Mets hurlers topped good, young Cubbies' batters. It's just startling that Bryant, Schwarber & Co were flailing at heaters; usually, it's the soft stuff that frustrates rooks when they get to The Show.

In the other dugout, nothing was getting by the incredible Daniel Murphy:

Like the rest of the Mets in the midst of summer, Murphy was fighting through a bad patch at the plate when hitting instructor Kevin Long suggested the 6-2 & 215lb second-baseman set up closer to the plate to generate pull power.

Dude's been on fire ever since, including the early-August sweep of Washington that put them atop the NL East to stay.

Ironically, Cuddyer's been a bit player during the post-season, but his vibes were picked up by the likes of Wilmer Flores, who couldn't bear the thought of leaving Queens.

Because Mets' ownership were victims of the Madoff fraud and their own miscalculations as a result, payroll's been a bit light. Cuddyer's $8.5million contract is fourth-highest on the team. Fortunately, their scouting and development departments have made up the difference, so they project to be decent on the field for a few years to come.

As will the Cubs.