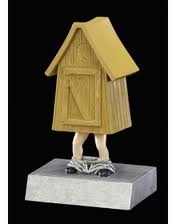 I was in the post office the other day, and I couldn't help but notice the picture of the Blue Jays team on the wall. It was right between the last known photo of ‘Whitey’ Bulger and the Los Angeles Angels of Anaheim team picture.

Yes, they are all wanted for their many crimes against Major League Baseball. So the Wait ‘til Next Year Award goes to those two teams with some of their players up for some of the individual awards ...

The 2013 Sigh Young Award goes to RA Dickey and Josh Johnson. It was a photo finish with the Tribes’ U-ball-go Jimenez trailing by a length. Dickey has been hurting all year with his neck and back giving him lots of problems. I suppose turning to see all those rockets flyin' outta the park would put anyone in a neck brace. Johnson? He has basically looked like Charlie Brown out there on the hill gettin' his clothes knocked off by all the bullets being hit back through the box. With José Reyes back on the DL again after re-aggravating a perforated fallopian tube, the Jays have definitely seen better days.

The 2013 Cy Young Award should be shared as well because you can't go wrong with either Matt Moore or Clay Buchholz starting the All-Star game this year. Last year’s Cy Young winner, David Price, has been throwing like his arm is on backwards, but he will get $100million from someone, and I'm thinking the Mariners are gonna pull off a deal for him at the deadline if they can hang around until then.

The 2013 AL Least Valuable Player Award goes to the Halos’ Josh Hamilton. I don't know if he’s had another relapse, or maybe he's goin' to the plate all banged up or something? If you are Josh, then the best advice I could give you would be to try and hit the ball in the middle and don’t hit anything else.

The 2013 AL Most Valuable Player Award goes to Motown's Baby ManRam. He has no peers at the dish, and he is going to rake major league pitching for the next ten years. He's on his way to another Triple Crown season as we speak.

Stay tuned for next time, when we give out the first annual Quarter-of-the-Way through the Baseball Season Awards to those deserving in the National League.