Mondesí Poised for History: An MLB Debut in the World Series 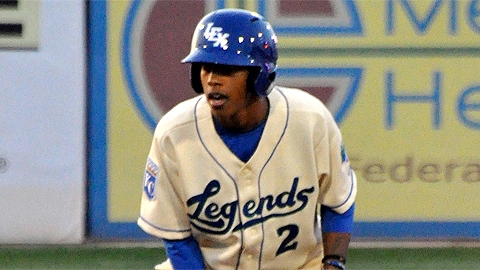 Raúl Mondesí played 13 years in The Show and never made it to the Fall Classic.

But his DNA finally made it.

The Kansas City Royals have activated one of his sons -- who's never played higher than AA ball -- for extra bench options against the New York Mets.

If he gets into a game, the rookie shortstop will become the first player in history to start his MLB career in the World Series.

To be clear, this is Raúl Adalberto Mondesí, as opposed to his brother, Raúl Mondesí Jr, who's in the Tampa Bay Rays system. Seems like dad felt like doing a Manny Ramírez, who gave his first name to two sons, albeit by separate mothers.

And he's still three behind George Foreman, who gave his first name to five sons and even sneaked a daughter into the act:

But none of them are going to debut as heavyweight champion, and Manny's kids may never make the pros, either.

So the current mayor of San Cristóbal must be busting his buttons with a unique sort of pride.

Raúl Adalberto will be the insurance in case Royals manager Ned Yost contemplates a double-switch somewhere in the proceedings. It wouldn't be a foreign move to him after spending 12 years as a coach under Bobby Cox in Atlanta.

The kid's got wheels to go along with his $2million signing bonus, which he's justified with action like this for the AA Northwest Arkansas Naturals in August:

Just possibly versatile enough to do what no living being has done before.