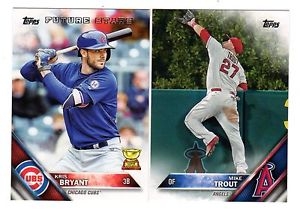 The future appears to be rather bright for MLB.

There's a virtual bounty of young talent in baseball at the moment, and two of the really good ones just took home some much deserved hardware.

Kris Bryant of your 2016 World Series champion Chicago Cubs was named NL MVP by a rather substantial margin, which came as a surprise to absolutely nobody.

The 24-year old phenom followed up his 2015 Rookie of the Year campaign with an even better season, cranking 39 homers and driving in 102 runs while scoring 121.

Sparkles also displayed some impressive versatility in the field, playing six different positions during the season.

Dude seems to have things under control.

By the way, he finished second in MVP voting the other three seasons.

At 25 years old, Trout is already being discussed as one of the greatest ballplayers to ever live, and while this may sound like hyperbole, health permitting, this may actually turn out to be true.

MLB is no doubt turning cartwheels over these two dudes, along with Bryce Harper and others.

With the recent World Series ratings bonanza, along with sagging NFL viewership, MLB is beginning to turn the tide in regard to cultural significance.

There has been some idle speculation about Trout being traded to the Cubs.

While this isn't going to happen, it's fun to consider the ramifications of the best player in baseball joining the best team in baseball.