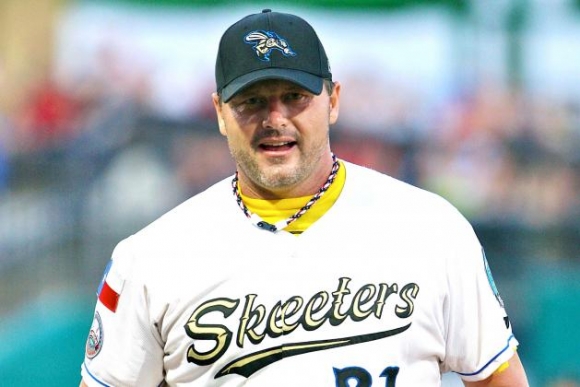 As title series go, the National Baseball Congress could host the purest of them all.

If a team shows it can pack the house, it's in.

All these years, the Cubs have gotten it wrong.

They should either start a petition to change the MLB playoff rules or head to Wichita. Assembling a buncha past-their-primes for the third-oldest sporting event in Wichita -- no idea; didn't look -- was the brainchild of nearby native Adam LaRoche.

Dude had time on his hands, of course, because of his sudden retirement due to a ChiSox-child issue.

So, he started calling old teammates about a weekend-warrior sorta thing, ie- beer-&-memories after the game; ice-&-ibuprofin the next morning.

His recruiting strategy was brilliant: start with a well-known independent-ball chucker ...

... and wind up with 24 MLB veterans plus Koby Clemens, who must be filling the role of Robin.

Interestingly enough, the longest holdout was one of LaRoche's best buds, Chipper Jones.

But he finally came around.

Thus, the Kansas Stars are clearly this year's favorites, but LaRoche took no chances.

He didn't invite any ex-Cubs.