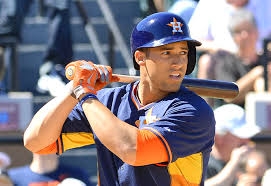 It was another wild and wacky week around the horn in Major League Baseball, with teams jockeying for position even though we’re just into the first week of May.

The Houston Astros continue to exceed expectations by posting a 10-23 record. Before the season started, they were picked to finish dead last in the AL West. That’s clearly one of the toughest divisions in baseball, but still, this is getting ridiculous.

The 'Stros are currently on pace to blow past the 100-loss mark for the fourth consecutive season and may have rushed über-phenom OF George Springer. He learned a tough lesson in baserunning this week as he was gunned down trying to tag up from second base by A’s OF Josh Reddick.

It’s either learn these painful life lessons at the major-league level, where Springer will either be a mainstay in the Astros lineup for years to come or dominate AAA pitching with the Oklahoma City Redhawks.

Not much change in the rankings from last week, other than the Seattle Mariners dropping out of the Top Five, due to winning seven out of eight -- including two victories in the Bronx over the Yankees -- vaulting them into second place.

One thing that hasn't changed: the Houston Astros remain on top.

Teams are running out of time and excuses that the season's still early and they have time to turn it around. That's true if the current group of players they’ve been trotting out day after day all of a sudden figure out how to hit, catch, and throw better.

MLB isn’t like the NBA, where you can purposely tank a season for the No 1 pick and land a studly franchise player. In baseball, top draft picks often flounder in the Appalachian League for a couple of years before advancing to the next level.

And if you’re in the Appalachian League, anything is better at the next level.