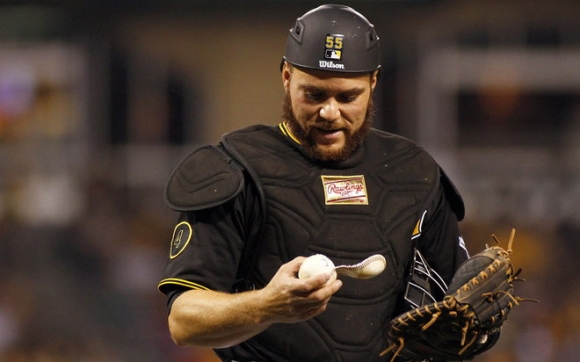 For the past three days, I spent my free time at Safeco Field in Seattle, watching some of the most apathetic, disinterested crowds I’ve ever seen at a live sporting event. Or a tape delayed event for that matter.

Spectators get more riled up at an elementary school spelling bee than a Wednesday afternoon Astros-Mariners matchup featuring a Jarred Cosart vs Chris Young duel.

Only the diehard fans were rewarded as Mariners 3B Kyle Seager hit a walkoff three-run homer in the bottom of the ninth inning to give the M’s a 5-3 victory. This was Seager’s second dinger of the game, and he accounted for all five RBIs. You know the saying: “When it rains, it pours.” Bang that out, Kyle:

Speaking of pouring, last night, the roof at Safeco Field was closed for batting practice, opened about five minutes before first pitch, and promptly closed again by the bottom of the secnd inning because so much rain was coming down, a fan asked if it was snowing.

This is Seattle, not Minneapolis. Even though the springtime weather in Seattle is about as schizophrenic as Jack Nicholson in One Flew Over the Cuckhoo’s Nest, the engineers of Safeco Field were smart enough to design it with a retractable roof.

Apparently Target couldn’t spring for a roof at the Twins' signature stadium. Perhaps Target Corporation should invest more money into IT security and reverse, hexadecimal encryption to protect consumers' credit card information than putting the red circle on another baseball stadium named after a corporation. Not that Safeco Insurance has much room to talk, but I don’t have auto or home insurance with Safeco.

That free year of free credit monitoring is going to come in handy when I attend the All-Star game at Target Field in July. I’ll bring cash to the park, thank you very much! Did anybody predict that the Twins' All-Star representative would be OF Chris Colabello instead of Joe Mauer?

One thing is for sure. After watching three paltry crowds at Safeco Field during the week, both of those teams are bound to be in the weekly Snark Rankings for some time to come.

It’s still early in the season, as the calendar hasn’t switched over to May yet. Still, the season is 1/8th of the way complete, so you can always think there’s plenty of time as long as your staff ace hasn’t suffered Tommy John surgery.

Maybe some of these teams will benefit from instant replay and catch a break, or seven, along the way and get a victory based upon some new age transfer rule. There’s always the bobbleheads to get fans through the door.

They’re not coming to watch quality baseball games. That’s for sure.