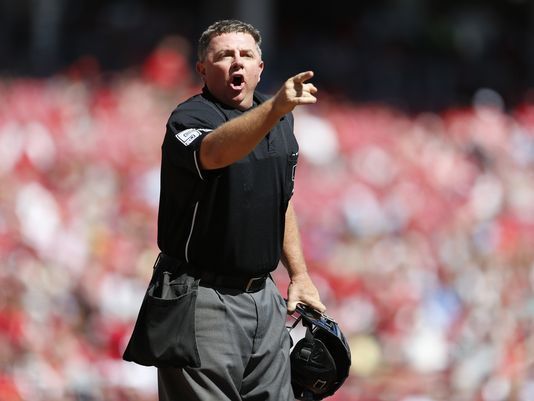 People really need to lighten the hell up.

If that statement is too broad, let's narrow the scope a bit.

MLB umpires need to lighten the hell up.

During a recent game in Cincinnati, Chicago Cubs catcher Wilson Contreras exchanged a few words with home plate umpire Greg Gibson while batting, a scene that culminated in the ejection of Cubs bench coach Brandon Hyde.

While the details are somewhat murky, it seems the situation may have escalated due to Contreras not thanking Gibson for being granted time.

Here is Contreras attempting to explain this nonsense.

This is what Willson Contreras said when asked about what happened when he was at the plate and bench coach Brandon Hyde got tossed. Apparently the ump wasn't pleased with Willson for not thanking him when he granted him timeout... pic.twitter.com/5qu8eKlgQx

If this is in fact true, then Greg Gibson should be flogged publicly.

Do players really need to formally thank the umpire for anything?

While it is indeed polite, it's also completely unnecessary.

As far as Hyde goes, it's unclear what he said to earn his removal from the game.

Perhaps it was one of those magic words.

Quite simply, an umpire shouldn't make himself the spectacle.

Looking at you, Joe West.

This is what Gibson apparently did.