MLB's Top Players: Age 25 and Under 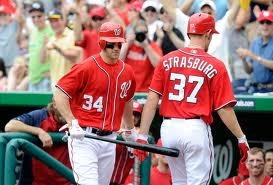 ... And in the beginning it was written ... a relevation which foretold that the world shall bear witness to a great becoming ... behold baseball fans! ... For it is he who brings unto us his left arm ... the arm that shall go forth and dispense thy proverbial Linda Ronstadt fastballs that shall be Blew By You ... so sayeth the Lord ... and thou shall be done in Cincinnati as it is in heaven.

Even though he may appear to resemble the love-child of Jimmy Walker and Urkel, I told Aroldis that he may take solace in the fact that, as far as I was concerned, there is nothing more physically attractive than a 6-5 lefthander who can throw a marshmallow through a cinderblock from 60' 6" away. In 272 professional innings, he has a mind-boggling 407 strikeouts while yeilding only 170 hits. He consistently dials it up into the triple digits and has been clocked at legendary speeds -- 106mph is considered urban legend by some -- which is among the allegedly fastest pitches ever recorded.

Being a southpaw pretty much guarantees Chapman that he will have a job pitching somewhere in MLB until someone has to tell him he's dead.

Why are the Halos messing with perfection? This kid's got more tools than a Home Depot and he's a natural lead-off guy. Yet, after a season that saw him dominate every facet of the game as a 20-year-old, the Angels feel compelled to keep moving him around in the order and in the outfield.

After a slow start, Trout's numbers have improved dramatically even though he has been moved around so much. It just shows that he is a total team dude who doesn't care where he's playing, just as long as he's playing. The Halo shot-callers would find that if they just continue to run him out there in CF and in the lead-off spot every night, the continuity of knowing his role would only result in another monster season doing what he does best. Everything

There isn't much not to like about this Manny among boys. He's a true masher who hits for power and average whose only weakness as a ballplayer is Kryptonite. Still just a baby at 20, Machado's approach at the plate is that of a polished, veteran hitter, and in the field, he is reminiscent of another former Birds third sacker who monopolized the Gold Glove market in his era, Brooks Robinson.

Machado's attitude and work ethic are so good that he is every major league manager's nocturnal emission. It doesn't hurt that he's in a batting order surrounded by the quality sticks of Nick Markakis, Adam Jones, Chris Davis, Nate McClouth and Matt Weiters, all of whom for years to come will provide him with better insulation in the batting order than 3M ever could.

Now, I wasn't actually there for his birth, but I think this kid came out of the womb clutching a Louisville Slugger and wearing a set of spikes. He just looks like he was born to play ball. Not as polished as other youngsters like Trout or Machado, Harper still debuted in The Show at the tender age of just 19, so his maturation process is ongoing. Early signs show Harper being able to do it all while making it look effortless. The cocky confidence exhibited in the way he plays the game is fine by me because most great players have that swagger, and at the end of the day, it 'aint bragging if you can back it up. Right?

Harper seems to have that gritty style of play where he leaves it all out there on the field. So far, he has been 'durably delicate,' and hopefully, as he plays the game with reckless abandon, it won't translate to very many stints on the DL, which would rob him of significant playing time and allow him to put up the numbers he's capable of.

I have this recurring dream ... and in it, Matt Moore is the No 3 starter on my staff. The funny thing is that he's the No 3 and that means I have two dudes in the No 1 and No 2 slots on my staff who are better than him ... if that's even possible. Hey ... I can dream. Right?

Moore's a left-handed power arm who has displayed excellent poise and outstanding control so early on in his career. Not to mention how sound his mechanics are, as his wind-up and follow-through put no unecessary strain on his arm or torque on his elbow. He has also pitched in the big-spot already in his career, shutting down a vaunted Ranger offense during the 2011 playoffs, where he displayed a maturity that went way beyond his years. Moore is going to be better than David Price, and when the time comes and the Rays can't pay him the cabbage he wants, teams are going to be falling all over themselves to get a crack at throwing Monopoly money at this kid.

The knock on Castro is in the field where it is thought that the only way he's going to ever get a Gold Glove is by going to an ACE hardware store and buying spray paint. So what? He is perfectly capable of working at becoming a better caliber shortstop, and he probably will eventually be a good one. There are rumblings that the Cubbies front office is down on Castro this year because his average has slipped to the point that it may be making his defense suffer even more and he could thus be had in the right deal if it were to come along. Maybe that's just what this kid needs: a change of scenery in the middle of a batting order on a contending team. If it happened, just watch as he'd get 200 basehits a year, every year, over the next 15 seasons.

Has ever a No 1 pick been so relentlessly hounded by the media in both the pre- and post-draft as this kid was? I guess they just couldn't help but notice the goods he was bringing to the table.

A proto-typical power pitchers frame at 6-4, Strasburg's sparkling mechanics allowed him to deliver the most free and easy 99mph fasball anyone had ever seen. Impressive as that was, there was still so much more to love. His freakish command and control of four above-average pitches had the scouts pointin' north behind the backstop way before he even got to San Diego State. From there, it was a free-for-all, which had some scouts offering to sell their expendable internal organs on the black market just for the remote chance at signing him. They saw how this kid displayed the rarest of rare talent by combining the uncanny control of Greg Maddux and the exploding fastball of Nolan Ryan.

Strasburg's No 3 pitch is his change-of-pace, which could very easily be the No 1 pitch of just about every other hurler in MLB. At 24, he is more than a polished gem who's not yet even approaching his prime. His biggest question mark isn't how dominant he might become but rather whether or not he can avoid the injuries that have plagued him early on in his career. If he can stay vertical, then there is no question he has the potential to be the best pitcher in Major League Baseball. 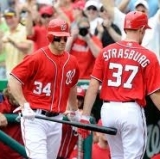 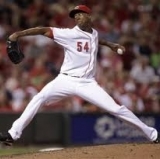 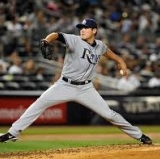 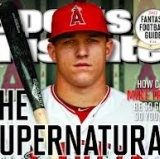 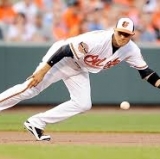 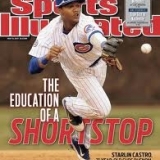