MLB's New 2B Sliding Rules: Nailing Down the Neighborhood 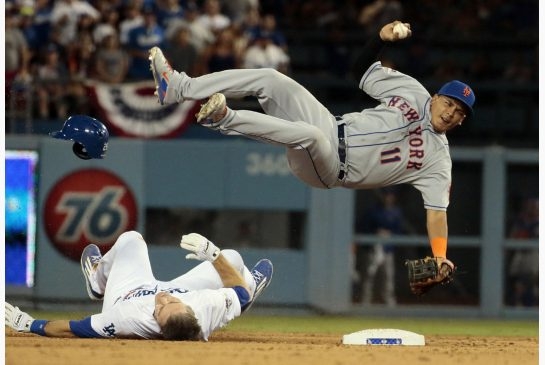 What's the biggest change in baseball over the past 50 years?

Same as the other sports: Loads of dosh.

Not that money hasn't always driven decisions in the business. However, now, with so much cash tied up in player salaries, MLB owners, especially, aren't huge fans of next man up.

So when Old School advocate Chase Utley upended New York Mets shortstop Ruben Tejada -- and then some -- in last year's playoffs, you knew this was gonna happen:

Frankly, all those changes reflect are refinements of existing rules.

Players have always had to be on a path to contact with second base when sliding. Otherwise, umpires could call interference, ringing up both the runner and batter-runner, and that was that.

This used to be a judgment call. Now, it's quantifiable.

It doesn't necessarily mean that slides will be any better or that there will be no contact.

So, really, the most significant development will actually be eliminating the neighborhood play.

Middle infielders are no longer moving targets. Ironically, the rule refinement designed to offer greater protection may actually make them easier to hit.

And that will be the development to watch as the 2016 season unfolds.