MLB's Fall Ball Replay Experiment: Umps Get It Right 80% of the Time 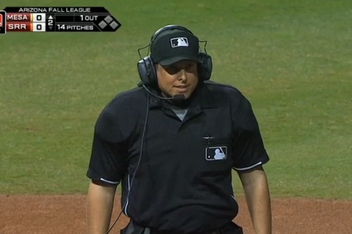 As any St Louis fan will tell you amidst blue-laced language, Denkinger's incredible blown call on a play that wasn't even close in the ninth inning of Game 6 in the 1985 World Series turned momentum's tide, from which the Cardinals never recovered. It's an incident that almost always leads the list of diatribes about the fallibility of baseball's men in blue.

As we all are aware, MLB is now taking steps to implement technology so that the number of bad calls will be reduced.

And yes, that's reduced, not eliminated. Instant replay procedures in other sports, most notably football, have shown that the cameras merely make human fallibility one step removed from the on-field call, downgrading many decisions from totally outrageous to bemusingly puzzling. Still, it seems to filter out the most incompetent rulings.

MLB has recently completed its experiment of expanding replay, using the annual Arizona Fall League as the proving ground. Five games were outfitted with the requisite number of cameras, and managers were encouraged to ask for digital opinions as often as they liked in order to get a better sample size of replay process efficiency. Here are two of the challenges:

What remains to be seen: the sticky issue of neighborhood plays at second base on double play attempts. Umpires usually give the shortstop and second baseman covering the force a bit of leeway for health reasons, ie- so they can avoid injury from an onrushing slide. Now, it appears the dexterity required for the fielder to hang in there and still make the throw to first will become a more relevant issue when his contract talks roll around.

MLB seems satisfied with the fall league results. Ironically, a main consideration was delays, but this didn't seem to be a factor. The poobahs who matter will no doubt formally approve this system at their scheduled meeting later this month.

The reality of this and similar policies in other sports is that the money is now so big -- yes, gambling factors into it -- the games' overlords must be seen to be doing something about close calls. Baseball has now bought into it.

But it will wait until another day to visit the relativity of every umpire's personalized strike zone. And only if it has to.