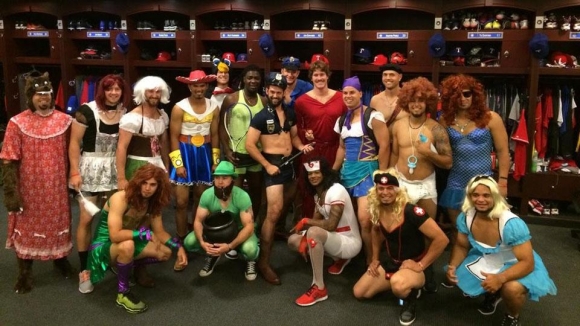 Grab your cleats and put away those high heels.

As part of the new labor agreement, MLB has decided to police the dress-up portion of teams' annual rookie hazing rites of passage.

Sadly, we'll no longer be treated to the sight of young ballplayers being coerced into wearing women's clothing to meet the requirements of some primitive initiation ritual.

This integral part of the game is now lost forever as political correctness claims yet another victim.

Now, who exactly is that hurting?

In addition to dudes in dresses, any costume deemed inappropriate or offensive is now considered taboo, as well.

Many former and current ballplayers -- most notably Huston Street -- are condemning the new edict, claiming that these rituals are perfectly harmless and actually bring teams closer together.

The advent of social media has placed pretty much everything under a microscope, including MLB rookie dress-up fun time.

As a result, there's endless footage available of such things, and more opportunity for people to take offense.

Of course, the spirit of this new policy can be found in the anti-bullying language.

If there are players forced to do this against their will or being treated differently because they refuse to participate, that's a different animal.

But for the most part, this type of hazing seems fairly benign.

Besides, there are far worse initiation rituals to be found in the NFL.

Or even at Faber College.